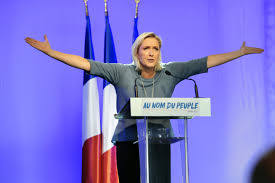 French presidential candidate Marine Le Pen has announced that she is temporarily stepping down as head of her National Front party, ABC News reports.

Monday’s move appears to be a way for Le Pen to embrace a wide range of potential voters ahead of the May 7 runoff between herself and Emmanuel Macron, the independent centrist who came in first in Sunday’s first round.

“Tonight, I am no longer the president of the National Front. I am the presidential candidate,” she said on French public television news.

Le Pen has said in the past that she is not a candidate of her party, and made that point when she rolled out her platform in February, saying the measures she was espousing were not her party’s, but her own. Read more at ABC News.