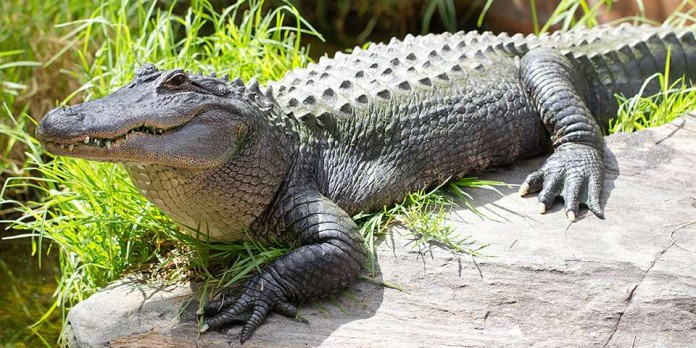 The snatching of a 2-year-old boy by an alligator from a beach at a Disney resort Tuesday night immediately raised questions about the animal’s behavior and the company’s responsibility.

Among them: How common are alligators in the lagoon where the attack happened? Did Disney do enough to mitigate the problem or warn tourists about potential dangers? If not, could the resort be held legally liable for the toddler’s death?

According to the Florida Fish and Wildlife Conservation Commission, there are an estimated 1.3 million alligators in the state. The agency regularly warns visitors that Florida is teeming with wildlife and that visitors should tread carefully. In addition, the Florida Department of Environmental posts warning signs that alligators are present near designated swimming areas and walkways in state parks.

But Tuesday’s fatal attack took place along a well-tended beach by the man-made Seven Seas Lagoon, outside the upscale Grand Floridian Resort & Spa. The boy, on vacation with his family from Nebraska, apparently had waded inches into the water when the alligator attacked. There were no other people in the water at the time, according to authorities. Signs posted near the lake warn against swimming in it, but the resort did not have signage warning of alligators in the water. The company will “thoroughly review the situation for the future,” according to a Disney official.

Officials told reporters that, according to records, this was the first alligator attack at Disney World in its nearly a half century of operations. Nick Wiley, executive director of the Florida Fish and Wildlife Commission, said the agency works closely with the theme park to remove any “nuisance alligators,” or gators that are at least four feet in length and could pose a threat to people, pets or property.

However, Wiley didn’t know how often his agency actually removes nuisance gators from the park, and he wasn’t able to provide an estimate for how many live in the waters on Disney property. A local sheriff said there had been no recent reports of any nuisance alligators in the area, but questions about their presence in the lake will be part of the ongoing investigation.

“There isn’t a waterway in Florida that doesn’t have an alligator in it,” said Kenneth Krysko, herpetology collections manager at the Florida Museum of Natural History, and an expert on the state’s alligators and crocodiles.

During the mating season, which Krysko said just ended, is when most attacks occur. Big males become very territorial, and smaller males like the one suspected of taking the 2-year-old scatter to smaller bodies of water to feed. The hour of the attack, about 9 p.m., is an optimal time for feeding. “Yes, that is the time of day that alligators are coming out and feeding. People are at the surface, splashing around. It’s just so sad because you have a 2-year-old, which is very small. A four-to-six-foot alligator can view that as prey. An animal would have no problem getting such a child.”

Krysko wondered whether the alligator in Tuesday’s attack, unlike most, had no fear of humans. He suspects that visiting tourists might have been feeding it. “That’s the big problem. It loses its natural fear of humans when that happens. It goes up to humans, sees a child, and that’s the first thing it takes. That’s the sole reason why it’s illegal to feed an alligator in the wild.”

Floridians are extremely wary of alligators, for the most part. The danger is so ingrained in the general public that many small bodies of water lack posted warnings. “Early morning or late evening, you don’t go messing around on a shoreline with vegetation because of alligators,” Krysko said.

Frank Mazzotti, a professor of wildlife ecology at University of Florida, said the fact that the Disney lagoon was man-made matters little. Alligators pop up constantly in man-made canals, golf course lakes and retention ponds that dot the state. “It’s really impossible to keep them out of any body of water,” Mazzotti said.

Mazzotti noted that Florida has a “first-class” nuisance program that will help businesses or citizens remove or relocate alligators that behave in a threatening manor. “The success of that is reflected in how rare these events are,” he said. “What this comes down to is the fact that as much as we might like to — and especially for our children — we cannot totally remove risk from life. . . .Something like this is likely no one’s fault. . . . This is bad luck, unfortunate circumstances.”

But who is at fault will likely become a central question after the initial shock of the tragedy begins to fade.

Alan Sykes, a professor at Stanford Law School, said the Walt Disney Co. could be held liable for the incident if there is proof of negligence.

“The hotel owes a duty of care to its customers to take reasonable measure to make the premises safe,” said Sykes, who stressed that he didn’t know all the details about the incident in Orlando. “That would include if there are hidden hazards in a lagoon on the hotel property.”

He said a key question would be whether the resort had prior knowledge of alligators in the water near the hotel and what it had done to mitigate that issue, or at least adequately warn tourists of the potential dangers. “A simple ‘no swimming’ sign might be deemed insufficient,” he said. “If it gets litigated, it’s most likely a case about reasonable warning.”

Whatever the particulars, Sykes said the case is almost certain to attract the attention of lawyers seeking to sue the resort.

“I wouldn’t be surprised if Disney ends up settling this, even if they have some decent legal argument,” he said. “It’s a black eye on the Disney resort.”

Matt Morgan, an Orlando attorney who has litigated numerous negligence cases against Florida theme parks, agreed that any case would turn on a couple central questions. “What did Disney know about the presence of alligators and when did they know it? What protections were in place for these visitors?” he said. “If Disney knew and did not take steps to warn visitors, they could be liable.”

Morgan said his observation that the lake is lined like a sandy beach with chairs and umbrellas shows that visitors were welcome on the shore. The argument one could anticipate Disney making is that the presence of alligators in Florida’s fresh waters is well known, he said. The counter argument “is this family from out of state that comes to Disney World assumes that Disney has taken every measure to protect them and their family, and could not in their wildest nightmare imagine that there was an alligator large enough to take their son.”

Disney officials did not immediately reply to a request for comment on potential liability issues.

On Wednesday, those questions took a back seat to the ongoing search for the body of a 2-year-old boy and concerns for his grieving parents, who’s vacation to the Magic Kingdom had swiftly turned into a nightmare. Disney closed its beach areas and recreational marinas, although the nearby theme parks remained open Wednesday. Authorities said trappers had caught and euthanized four alligators overnight but had not yet found any evidence that those animals were responsible for snatching the boy. They later investigated a fifth alligator.

“This is a very human experience we’re talking about. We’re dealing with this family who, there’s no question, will lose a 2-year-old child,” Orange County Sheriff Jerry Demings, himself the grandfather of a 2-year-old boy, told reporters. “Our ultimate goal is to try and bring some closure to this family by bringing home their loved one.”