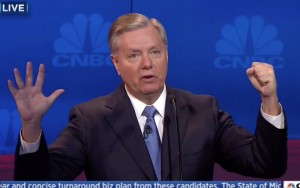 Just like he did in the previous Republican undercard debate, Sen. Lindsey Graham stole the show Wednesday evening with his theatrical antics, cracking jokes and making stump speech-like proclamations that often ran over his allotted time, Andrew Kirell reports for the Daily Beast.

Among the four bottom-ranking candidates on stage in Boulder, Colo., Graham generated the most applause and social media buzz with his comments on foreign policy, immigration, and Hillary Clinton.

At one point, while discussing alleged cybersecurity threats from China, Graham flashed some bravado by showing a fist and an open palm, declaring, “Make me commander-in-chief and this [garbage] stops!”

Graham also drew rousing applause and laughter when he turned a question about climate change into a mocking rant about the Democratic presidential candidates. “I’m tired of losing,” he shouted. “Good god, look who we’re running against. The number one candidate on the other side [Hillary Clinton] thought she was flat broke after her and her husband were in the White House for eight years,” Graham jabbed. “The number two guy [Bernie Sanders] went to the Soviet Union on his honeymoon and I don’t think he ever came back.”