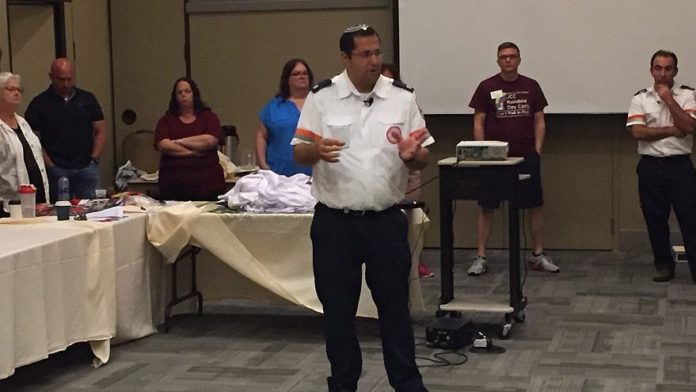 The instruction, known as “First 7 Minutes” training, taught course participants how to remain safe amid the chaos of a violent incident and how, in the immediate aftermath of an attack, to render critical first aid and other assistance in the seven minutes it typically takes first responders to arrive.

The training by MDA was sponsored by the Milwaukee Jewish Federation. Much of the training, including the first-aid instruction, and emphasis on safety and needs prioritization, is also applicable to other emergency situations, such as building collapses, fires and natural disasters. It provides course participants with skills and a sense of empowerment critical in a variety of situations.

Because of the sheer number of terrorist incidents that Magen David Adom has seen in Israel and its role in developing new protocols for responding to attacks, the organization has emerged as the most experienced mass-casualty-response organization in the world.

The rise in armed extremist attacks against religious institutions in America, including lone-gunman attacks on churches in Charleston, S.C., and near San Antonio, Texas, and the 2012 shooting at the Sikh gurdwara in Oak Creek, Wis., was long a concern of the Jewish community, which has seen repeated terrorist attacks on Jewish targets in Europe and elsewhere in the world.

That concern was only heightened following last year’s attack at a synagogue in Pittsburgh and one this past April in Poway, Calif.

“When we saw the need to better prepare Jewish and other institutions for the remote, but very real possibility of a violent attack, we could think of no organization better-qualified than Magen David Adom,” said Moshe Katz, board chair of the Milwaukee Jewish Federation. “Unfortunately, they’ve had to contend with more terror attacks than any other EMS organization, providing them with expertise that’s unsurpassed in this area.”

“It’s about empowering people and providing them with the skills they need to better handle an attack.”

“Given the frequency and regularity of violent attacks against Jewish targets in Europe, we’ve long been coordinating training for civilians with the Jewish communities there,” said Raphael Herbst, a senior paramedic and instructor with Magen David Adom, who’s overseeing the “First 7 Minutes” program in the United States. “With the recent attacks in synagogues in Pittsburgh and California, and against other minority and religious groups, however, we’re now rolling out this program in the States, too.”

While the inaugural training sessions were conducted in Milwaukee, said Herbst, the program will be rolled out across America to virtually any community where institutions fear being targeted for attack.

“Jews don’t have a monopoly on being targeted for violent attacks,” he said. “Hatred, ignorance and violence, unfortunately, abound the world over and against many groups. Helping better prepare all members of the community ultimately makes everyone safer.”

More than just a first-aid course, the instruction provides participants with the knowledge effectively and simply to initiate care and save lives while ensuring people’s safety and taking actions that can best assist emergency first responders when they arrive.

“Our decision to conduct this training isn’t about scaring people or changing the way people live their lives,” noted Katz. “It’s the opposite. It’s about empowering people and providing them with the skills they need to better handle an attack, keep themselves and their loved ones safe, and help save lives should an attack occur. And we can think of few things more in keeping with the values of our community.”