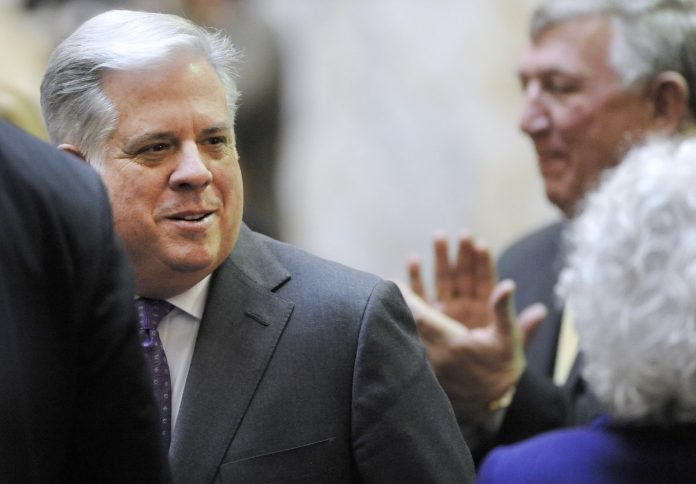 The blocked Facebook users, who are represented by the ACLU of Maryland, argue that Hogan “arbitrarily” censored their free speech by deleting their comments and blocking them from his Facebook page after they questioned his position on education policy and President Donald Trump’s travel ban.

It is the latest effort to test in court how much control government officials may have over what is posted on their official social media sites.

“The highest purpose of the First Amendment is to protect the right of Americans to engage in political speech and to petition the government to address their concerns,” said Deborah Jeon, legal director for the Maryland ACLU.

“It violates both the First Amendment and Maryland’s own social media guidelines for government officials to block out any voices of dissent or those simply raising questions about positions taken by public officials sworn to serve.”

Hogan spokeswoman Amelia Chasse called the lawsuit “frivolous” and “a waste of taxpayer dollars” and said the comments and users removed from the page were either hateful or part of an orchestrated campaign.

“The governor’s office has a very clear social media policy, and we will continue to remove all hateful and violent content and coordinated spam attacks to foster an open and constructive dialogue,” she said.

But several people interviewed by The Washington Post after being blocked this winter say they sent the messages on their own and used clean language.

Last week, in one of the first rulings on the topic, U.S. District Judge James Cacheris in Alexandria, Virginia, said that the chairman of the Loudoun County Board of Supervisors violated a constituent’s free speech when she banned him from her Facebook page.

Bradley Shear, a Bethesda-based privacy and social media attorney, said the issue of when a person can be deleted or blocked from an elected official’s account will probably end up before the U.S. Supreme Court.

“People have a right to make certain comments on an official account,” Shear said. “But there is the question of where you draw the line. . . . We’re just at the beginning of the legal process of where the law is going to end up.”

Hogan came under fire earlier this year after several Facebook users noticed that their posts were deleted or that they had been blocked from the governor’s page.

Doug Mayer, the governor’s director of communications and a named defendant in the lawsuit, said at the time that the governor’s office had blocked 450 people since Hogan took office two years ago. About half were blocked for using “hateful or racist” language, he said. The rest were blocked after the 2015 riots in Baltimore or in the days following the announcement of Trump’s travel ban – each time, Mayer said, because the governor’s office thought the postings were part of a “coordinated attack.”

Meredith Phillips, a Howard County resident and one of the four plaintiffs, said she was blocked after she asked the governor to make a public statement about Trump’s travel ban. She added her comment to a post on the page about the Chinese New Year.

Her post was deleted twice, according to the lawsuit. In her second post, she added that she was a Democrat who crossed party lines to vote for Hogan in 2014. When she tried to post the comment a third time, she realized that her access was restricted and that she had been blocked from the page.

“I couldn’t believe Governor Hogan would block people who disagreed with him, but who weren’t rude or threatening,” Phillips said in a statement. “Deleting any comment from constituents that doesn’t praise or agree with Governor Hogan is a violation of free speech.”

The lawsuit says the governor’s social media policy, “both on its face and as applied, unlawfully restricts constitutionally-guaranteed rights of the citizens of this State to free expression, and strikes at core protections for political speech and petitioning the government.”