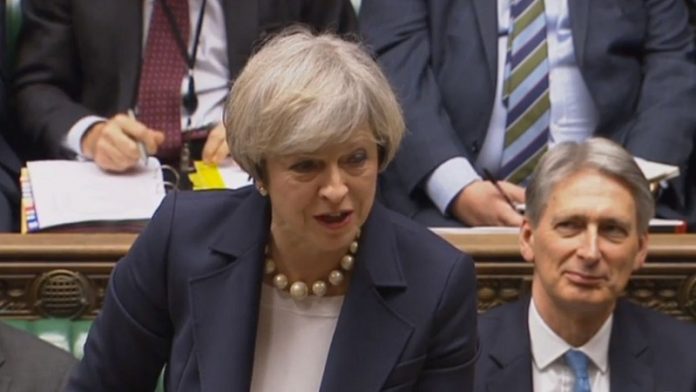 Prime Minister Theresa May said extremism has been tolerated for too long in Britain and signaled she’d seek new powers to root out terrorism after Britain was hit by the second attack in as many weeks, ratcheting up her rhetoric four days before a general election.

“It is time to say, ‘enough is enough,”‘ May told reporters outside her Downing Street office on Sunday. “There is – to be frank – far too much tolerance of extremism in our country.” Stamping it out “will require some difficult and often embarrassing conversations.”

Seven people were killed and 48 were injured in Saturday night’s attack, which began just after 10 p.m. in a popular night-life spot and lasted just eight minutes. A van swerved into crowds on London Bridge, before three men got out and went on a stabbing spree through nearby bars. The assault ended when police officers shot them dead a few hundred yards from where it started. The Metropolitan Police said later on Sunday that 12 people had been arrested in connection with the violence.

It was the third attack in the U.K. in less than three months. In March, a lone assailant rammed into pedestrians on Westminster Bridge and then stabbed a police officer outside Parliament. Then two weeks ago, a bomber killed 22 people — including children — at a pop concert in Manchester. May said that while the attacks weren’t directly linked, “terrorism breeds terrorism.” In that time, police and security services had disrupted five “credible plots,” she said.

It remains to be seen what impact, if any, the London and Manchester attacks will have on the election. The aftermath of the Manchester bombing led to bitter exchanges between opposition Labour leader Jeremy Corbyn and May, who was in charge of internal security for six years before becoming prime minister.

The opposition Labour party today suggested that May’s comments outside Downing Street went too far after the main parties had agreed to suspend campaigning for the day. Foreign affairs spokeswoman Emily Thornberry said she regretted the timing of the premier’s comments, saying she is trying to spark a debate too soon.

Emotions were also fired up by a series of tweets from U.S. President Donald Trump, who immediately seized on the attack and took to Twitter early Sunday to criticize London Mayor Sadiq Khan for urging calm.

“It is unbelievable and unforgivable that the President of the United States of America should launch such a self-serving and cheap political attack on London’s Mayor,” said Wes Streeting, a Labour lawmaker.

Londoners, meanwhile, showed little sign of being disrupted from their weekend routines as people poured out into cafes and parks on a warm Sunday morning.

The prime minister said her response would cover four areas:

– Confronting the ideology of Islamic extremism, and making the case for “pluralistic British values”

– Dealing with “safe spaces” in the real world, both abroad, where she pledged military action would continue, and ending the “toleration of extremism” in Britain, including by public sector bodies

– Examining the criminal justice system, including the lengths of prison sentences for offenders

Home Secretary Amber Rudd said social media and Internet companies, including Facebook and Google, need to do more to stop their platforms being used by extremists. Group of Seven leaders last month called on them “to substantially increase their efforts to address terrorist content.”

“It’s not good enough just to say ‘do no harm.’ We have to get them to actively work with us to stop their platforms being used to radicalize people,” Rudd said in an interview on ITV.

Metropolitan Police Commissioner Cressida Dick said earlier that she believed the incident was now under control. Police raided a block of flats in Barking, to the east of the city, the BBC reported.

Politicians including Brexit Secretary David Davis and Labour’s Thornberry said the June 8 election should go ahead as planned. The latest polls indicate the Conservatives’ lead over Labour has shrunk to between 1 and 12 percentage points, from more than 20 points at the start of the campaign.

No one has claimed responsibility for the killings on Saturday, which bore similarities to the attack in March, when a lone assailant rammed into pedestrians on Westminster Bridge and then stabbed a police officer outside Parliament. Islamic State claimed the Westminster and Manchester attacks, and has encouraged followers to carry out strikes during the holy month of Ramadan.

Two major events in Manchester will go ahead as planned on Sunday with additional security in place, Greater Manchester Police said in a statement on its website. They include a concert by U.S. pop star Ariana Grande — who was performing at the venue targeted by terrorists last month — to raise money for people affected by that attack.