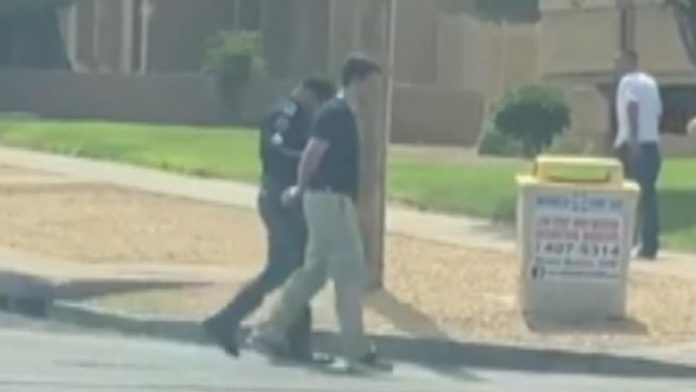 Eight Mexicans were among the 22 victims of Saturday’s mass shooting in El Paso, and Mexico is now exploring an unusual legal recourse: seeking the extradition of an American for a crime carried out on American soil.

Mexico has long used legal action to resolve international disputes, analysts say, but requesting the extradition of an American is unlikely to succeed as long as U.S. authorities continue pursuing a criminal case against the 21-year-old suspected shooter.

“At the end of the day, I would be very surprised if the U.S. government were to agree to it,” said John Bellinger III, who served as the State Department’s legal adviser under the George W. Bush administration.

Mexico’s potential demand for the El Paso gunman is more likely to prove a poignant symbolic gesture to a grieving and fearful public.

Mexican Foreign Minister Marcelo Ebrard said Monday his country may seek to extradite the alleged shooter, Patrick Crusius, on terrorism charges. Investigators believe Crusius is the author of an online manifesto that railed against a “Hispanic invasion” in Texas.

“We consider this to be an act of terrorism, carried out on United States soil, but terrorism against Mexicans,” Ebrard said.

He added that Mexico’s attorney general, Alejandro Gertz Manero, would make a final decision on whether to pursue extradition, but that Mexico had grounds to do so because the shooting qualifies as an act of terrorism under Mexican law.

U.S. authorities said Sunday that they are treating the case as domestic terrorism and are considering charging Crusius with federal hate crimes.

The suspect allegedly drove nearly 10 hours from his home in a Dallas suburb to El Paso – a predominantly Hispanic border city with deep ties to nearby Mexican communities – to carry out the shooting. The Walmart where the shooting took place lies adjacent to a major shopping mall that attracts huge numbers of shoppers from Ciudad Juarez, the Mexican city just across the border.

Many have decried the shooting as a lethal manifestation of white supremacist ideology. Mexico’s ambassador to Washington, Martha Bárcena, wrote on Twitter that “the intentionality of the attack against the Mexicans and the Latino community in El Paso is frightening.”

At a news conference Tuesday, Ebrard reiterated earlier pledges to ensure Mexican authorities are involved in the U.S. investigation into the shooting. He said he is compiling information to turn over to the FGR – the Mexican attorney general’s office – so they can participate in the investigation “under the agreements and bilateral treaties in place.”

“We are worried that other people think the same way as this suspect,” Ebrard said. “We want to participate in the investigation via the FGR, to be able to understand if this man had ties to other people and if he wrote the manifesto. We will raise all of this with U.S. authorities.”

The United States and Mexico have long been party to bilateral extradition treaties. The United States has often used this arrangement to bring criminals wanted for crimes in the United States from Mexico to try them in U.S. courts. That mechanism was recently used to prosecute Joaquín Archivaldo Guzmán Loera, the notorious drug lord known as “El Chapo,” in New York last year.

Mexico, meanwhile, frequently takes legal action to advocate for its citizens abroad. Mexico has historically opposed the death penalty, and it has provided legal resources to Mexican nationals facing capital punishment in the United States. It even took the United States to the International Court of Justice in 2003 – and won – on grounds that America had violated the rights of Mexican citizens it had condemned to death.

But Ebrard said Tuesday that Mexico had never extradited someone from the United States to stand trial in Mexico.

Legal experts agree that Mexico could make a plausible, albeit shaky, argument that the crime itself provides grounds for extradition – if Mexico can prove that, as Ebrard claimed, the shooting violated Mexico’s terrorism laws.

But they say two factors would complicate the case for extradition: Crusius is a U.S. citizen, and American authorities are pressing charges for the same crime.

The U.S.-Mexico extradition treaty obliges each country to turn over citizens of the other country suspected of committing a crime that falls under the treaty’s purview, according to Bellinger.

“The real hurdle here is that . . . this treaty does not require the other country to extradite its own nationals,” he said.

The biggest obstacle, however, is that U.S. authorities have already launched a criminal case against Crusius. Prosecutors in El Paso have already said they will seek the death penalty against the suspected shooter, and federal authorities are separately pursuing a domestic terrorism investigation.

International law prohibits two countries from trying a suspect for the same crime. And given Mexico’s aversion to the death penalty, the alleged gunman – if found guilty – would pay a steeper price in the United States.

“In most cases if you’re shopping between countries . . . you want to make sure [the suspect is] facing the stiffest penalties,” said James A. Gagliano, a retired FBI special agent who previously served as the bureau’s legal attache in Mexico.

Given these factors, experts say the likelihood of the United States turning over Crusius is virtually zero.

In a statement, the U.S. State Department declined to comment on the notion of Mexico seeking Crusius’s extradition but said “we will stay in close communication with the Government of Mexico as the investigation progresses.”

If Mexico were to pursue the suspected gunman’s extradition, the move would be largely symbolic, Stanford law professor Allen Weiner said.

“It is unlikely to be something that will produce any serious legal activity,” he said.

Bellinger said domestic politics might be compelling the Mexican government to explore extradition.

“The government is making a statement here to its own population that it takes offenses committed against Mexicans seriously,” he said.

Still, the prospect – even if slim – of bringing the shooter to justice in Mexico could serve as a salve to rattled Mexicans on both sides of the border who worry their lives are in danger.

“There’s a legitimate concern about Mexicans overseas, and this was shocking to Mexican society,” said Rafael Fernández de Castro, director of the Center for U.S.-Mexican Studies at University of California at San Diego.

Fernández de Castro predicted that Mexican President Andrés Manuel López Obrador would tread carefully to avoid a perception that Mexico was intervening in U.S. affairs. But he added that exploring extradition shows that “Mexico is trying to say something, trying to show its worry and preoccupation.”

“It’s hard for a regular Mexican to understand the culture and tradition of the right to bear arms in the U.S.,” he said.