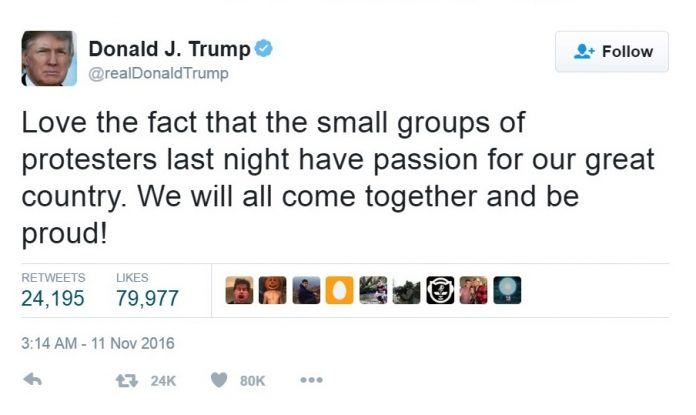 With the election over, most U.S. voters say that it’s time for @realDonaldTrump to retire from Twitter.

The billionaire businessman used the social media tool extensively during his successful campaign for the White House, showcasing its power for both promotion and distraction. He’s continued to do so since winning the Nov. 8 election, bypassing news conferences and most media interviews.

Tim Malloy, the poll’s assistant director, summarized the findings this way: “You’ve got the job. Now be a leader, not a tweeter.”

President Barack Obama was the first U.S. chief executive to use Twitter, and his administration has outlined a transition plan for his handle — @POTUS, which stands for President of the United States — to be given to Trump on Jan. 20, the day the 45th president will be inaugurated.

The official presidential account has 12.1 million followers, fewer than the 15.7 million the incoming president has amassed for @realDonaldTrump.

During his one major media interview since winning the election, Trump suggested he has no intention of ditching Twitter as a tool for promoting his ideas and attacking the media and others who challenge him.

The poll also shows a majority of U.S. voters are hopeful about Trump’s presidency, with 59 percent agreeing with the statement that they’re “optimistic about the next four years with Donald Trump as president.”

Voters are almost evenly split on whether Trump will worsen partisan divisions exposed by a bitter campaign, with 49 percent saying he’ll do more to divide the country and 47 percent saying he’ll unite the nation. Only 37 percent of American voters in the survey say Trump is a person to whom they can relate, while 61 percent say they can’t relate to him.

A 53 percent majority are “very concerned” or “somewhat concerned” that Trump will veto a bill that’s good for the nation but bad for his business interests.

The survey was conducted Nov. 17-20 and included 1,071 voters nationwide who were interviewed via landlines and mobile phones. It has a margin of error of plus or minus 3 percentage points.