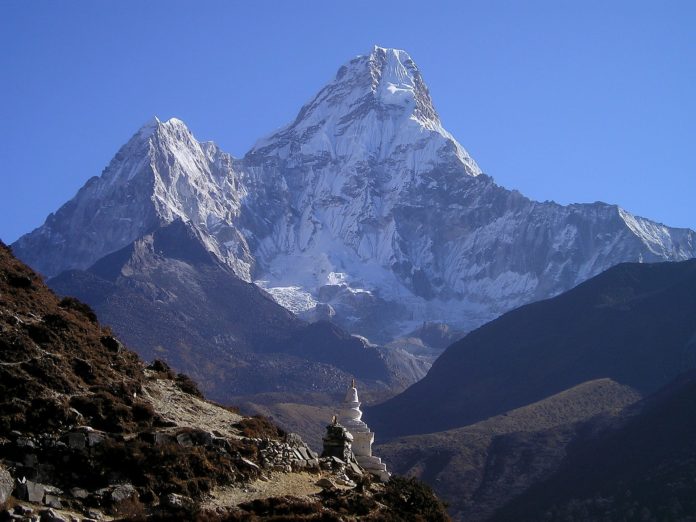 Nepal and China, the two countries that share a border on Mount Everest, announced a new official measurement of the mountain’s height on Tuesday: 8,848.86 meters, or 29,031.69 feet.

That’s about three feet higher than the most commonly used measure of Everest’s height dating back to a survey conducted by India in the early 1950s.

The announcement — which was broadcast live on national television in Nepal — is the culmination of an exhaustive process involving two trips to the summit and years of measurements to calculate Everest’s precise height above sea level.

“We can be confident that this is the most accurate height of Everest that we have ever had,” said Susheel Dangol, Nepal’s chief survey officer, who headed the project. “It was a huge responsibility on our part. It is a moment of great pride for us.”

Experts say that Tuesday’s figure is likely to become the standard height for Everest. “It will be difficult to improve on the new number,” said Roger Bilham, a geologist at the University of Colorado. The measurements taken by Nepal are “remarkable for their density.”

The exact height of Everest is a moving target, geologists say, thanks to shifting tectonic plates and the occasional earthquake. The former pushes the mountain’s height ever-so-slightly upward each year, while the latter can cause it to sink.

For Nepal, the drive to measure Everest was partly an exercise in national pride. Despite being home to the world’s highest peak, Nepal had never conducted its own measurement. Starting in 2018, Nepal announced it would spend $1.3 million on the project.

The country’s surveyors employed two methods to measure the mountain: The first was based on trigonometry, a time-tested technique that is also known as a leveling survey. The second used the latest technology, relying on a combination of readings from a satellite navigation system and a complex model of sea level.

It wasn’t easy. A Nepali surveyor who lugged a global positioning device and a ground-penetrating radar to the summit of Everest last year lost the tip of a toe to frostbite. His team faced a life-threatening shortage of oxygen on their descent.

Other surveyors transported a $200,000 piece of equipment called a gravimeter to 297 spots in Nepal. The gravimeter measures the force of gravity at a given location. Its readings are crucial to forming the detailed model of where sea level lies beneath Everest’s hulk of rock (satellite readings alone are not sufficient to calculate height above sea level).

The new joint measurement also involves an element of geopolitics. Nepal is wedged between two larger neighbors — China and India — and China has sought to deepen its influence in recent years. On Tuesday, Nepal and China hailed the announcement of Everest’s height as proof of the strength of their relationship.

The two countries agreed to collaborate on the Everest effort after a visit by Chinese President Xi Jinping to Nepal in 2019, said Buddhi Narayan Shrestha, the former director general of Nepal’s survey department who was also a senior adviser on the project.

China conducted its measurement using new data combined with prior information from its surveys of Everest in 1975 and 2005, Shrestha said.

The calculations by both countries “have synchronized well enough to reach this single figure,” he said. “It couldn’t have been more accurate than this.”

Everest — known as Sagarmatha in Nepal and Chomolungma in Tibet — straddles Nepal and China. Climbers can approach the summit from either side, but the route from Nepal has long been more popular. In 2019, crowding on the mountain may have contributed to one of the deadliest climbing seasons in years.

Nepal shut its borders to tourists during the pandemic but recently reopened to climbers. Most people seeking to summit Everest climb the mountain in the spring, particularly in May, when the weather is more favorable for ascents.

While Everest is the highest mountain the world, it is not technically the tallest as measured from base to peak. That superlative belongs to Hawaii’s Mauna Kea, which is largely underwater.