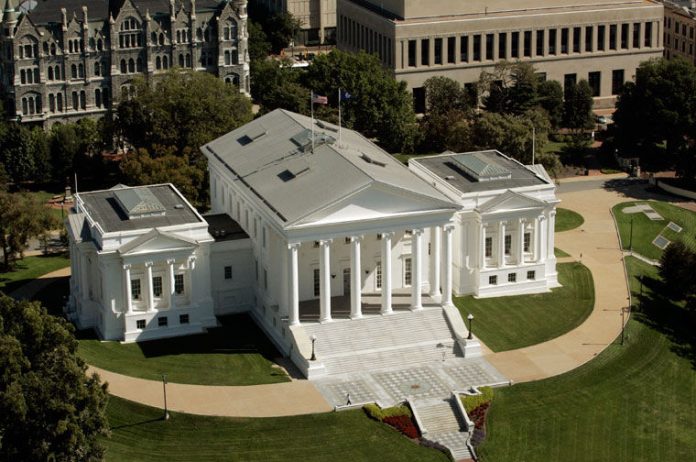 The Virginia Board of Elections has postponed plans for a name-drawing on Wednesday to decide the winner of a deadlocked House of Delegates race – and possibly which party controls the chamber – after one of the candidates announced plans for a court challenge over whether the election was really a tie.

The rare spectacle of filling a legislative seat by drawing one of two candidates’ names out of a pitcher has drawn widespread interest, in no small part because a Democratic victory would mean that the House, where Republicans had a 16-seat majority before the Nov. 8 elections, would be split 50-50 when the legislature convenes Jan. 10.

Democratic challenger Shelly Simonds said Tuesday that she will file a motion in Newport News Circuit Court on Wednesday, asking judges to reconsider their decision to count a disputed ballot as a vote for Republican incumbent David Yancey and declare the race a tie.

Simonds’s lawyers said they could not file the motion Tuesday because the court was closed. They also said they had written to the Virginia State Board of Elections asking it to postpone the name-drawing until the court decides whether to act in response to the motion.

Hours later, state Board of Elections member Clara Belle Wheeler said the panel had canceled plans for the 11 a.m. drawing. Wheeler said she expects the court to act on Simonds’ motion quickly, because “there is some urgency involved here.”

“We don’t want everybody driving to Richmond if there’s . . . a court order pending,” she said, explaining what she described as a unanimous decision.

On Election Day, Yancey appeared to beat Simonds in the 94th legislative district race by 10 votes. But a Dec. 19 recount left Simonds ahead by a single vote.

The next day, a three-judge panel decided that a ballot that was declared ineligible during the recount should count for Yancey, tying the race at 11,608 votes apiece. The ballot in question contained a mark for Simonds as well as a mark for Yancey, and an extra mark by Simonds’s name that the court ruled was an effort to strike out the mark in her favor. Republicans said the unknown voter had selected every other Republican on the ballot and intended to vote for Yancey. The panel of judges agreed.

If Simonds wins the seat, the House chamber will be split 50-50 between Republicans and Democrats, forcing the parties into a rare power-sharing arrangement. If Yancey wins, the Republicans will retain their majority by the slimmest possible margin.

In her motion, Simonds asserts that the panel made a “clear legal error . . . [that] ran contrary to Virginia law” by counting the disputed ballot. “This is really about the integrity of elections in Virginia,” she told reporters. She accused Yancey, a six-year incumbent, of trying to do “an end run” around proper election procedures.

Parker Slaybaugh, a spokesman for House Republicans, said “the Court acted appropriately and . . . the integrity of the process is without question.” The statement also noted that a recount in a separate House race involved Democrats challenging a disputed ballot, which the court agreed to review and then counted for the Democratic candidate.

In their letter to the Board of Elections, Simonds’ lawyers wrote that if the judges reconsider their finding that the contest was tied, there would be no need for a drawing. It also states that neither candidate would be harmed by a “brief delay” in naming a winner, so long as the process is completed by the time the General Assembly gavels in on Jan. 10.

If the race is still in limbo by that date, neither candidate would be seated – giving Republicans control of the chamber with 50 seats to the Democrats’ 49.

Wheeler said the matter should be settled before the legislature convenes. “I am of the very strong opinion that the people of Newport News need to have a representative in the House of Delegates,” she said.

The last – and perhaps only other – time the state settled a tied election by “lot” was in 1971, when candidates for a House seat in Fairfax – Republican William Moss and Democrat Jim Burch – each received 16,410 votes.

If there is a lot-drawing in the 94th district race, the loser could seek a second recount.

Democrats are also seeking a new election in a different House race that Republican Bob Thomas won by 73 votes, in which an apparent voter-registrar error led to 147 voters casting ballots in the wrong districts.

Katie Baker, a spokeswoman for the House Democrats, said Tuesday that the Democratic candidate, Joshua Cole, will not contest the results with the state legislature – a last-ditch, rarely used measure.

But Cole is still asking a federal judge to order a new election, with a hearing scheduled on Jan. 5. His decision not to contest the election with the legislature was first reported by WTOP.

Before the Nov. 7 elections, Republicans outnumbered Democrats in the House 66-34. The GOP has a smaller, 21-to-19 edge in the state Senate, where tie votes can be broken by the incoming lieutenant governor, Democrat Justin Fairfax.