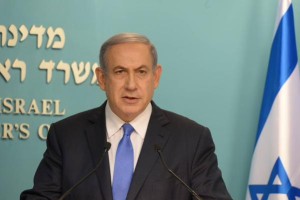 Israeli Prime Minister Bibi Netanyahu said Monday that he’d consider reviving peace talks around a 2002 Arab initiative that would offer statehood for Palestine in exchange for diplomatic recognition of Israel from Arab countries.

“The Arab peace initiative includes positive elements that can help revive constructive negotiations with the Palestinians,” Netanyahu said. “We are willing to negotiate with the Arab states revisions to that initiative so that it reflects the dramatic changes in the region since 2002 but maintains the agreed goal of two states for two peoples.” Read more.