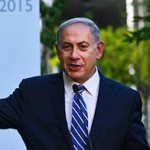 Israeli Prime Minister Bibi Netanyahu and his wife, Sara, arrived in Italy for an official visit on Thursday, landing in Milan, where they were escorted to the Milan Expo 2015 world trade fair now underway in the city. This year’s fair is focused on innovative technology in agriculture and food.

Netanyahu was scheduled to meet with the heads of the Jewish community in Florence on Friday and with the Italian prime minister on Shabbos.

At the Milan Expo, Netanyahu visited four booths, operated by Israel, Italy, the U.S. and China.

“I am very excited to be here,” he said.

“I am even more excited by the fact that Israel is an enormous global powerhouse in the fields of technology and agriculture and in developing new innovations,” Netanyahu added.

“Israel and Zionism have become enormous engines in agricultural development, in irrigation, in water preservation and in our ability to recycle wastewater. In the production of milk, the Israeli cow is the most productive in the world. All of this was seen by the million people who visited this exhibit, but no less important, by many millions in China, India, Latin America, Africa and all over the world. We aren’t only concerned with developing our own state, our own agriculture and our own food — we are doing it all over the world.”

Netanyahu said that “these abilities are stronger than any attempt to boycott us or push us into the margins, because we are creating a better future for all humanity, and there is no better place to see that clearly and obviously than in this place.”

The Israeli booth at the fair aims to share with the world Israel’s technological developments and innovative systems. The booth itself was built using advanced green technology tools, including installations designed to conserve energy and treat the air and water. The entire structure is ecologically friendly and is entirely recyclable and biodegradable.