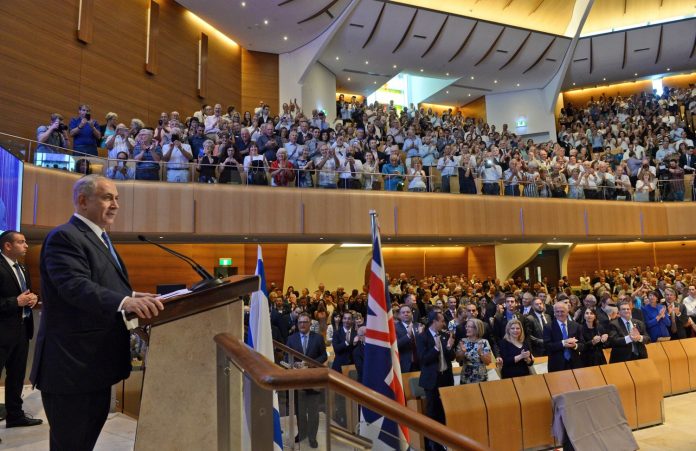 Israeli Prime Minister Benjamin Netanyahu spoke of the rising anti-Semitism across the world in an address to Australia’s Jewish community Wednesday.

“We have a battle against those who seek to demonize our people and the resurgent anti-Semitism that we see in many parts of the world. It is something that we need to fight together,” Netanyahu said.

Netanyahu’s speech at the Sydney Central Synagogue was attended by Australian Prime Minister Malcolm Turnbull as well as former prime ministers John Howard and Tony Abbot, along with hundreds of members of the Jewish community.

“I want to salute this Jewish community, which is unusually committed to the state of Israel, to the Jewish people. You’ve shown it time and time again,” Netanyahu said.

The Israeli leader praised Turnbull for standing up for Israel against demonization in international bodies.

“I salute you, Malcolm Turnbull, and the governments of Australia who have stood up time and time again against this demonization, including recently,” he said.

Netanyahu ended by inviting everyone to come visit Israel.

“I want all of you to come to Israel. I want you to visit your friends and your families, I want you to walk the streets of the old city in Jerusalem and the Golan,” he said. “We are part of you, you are part of us.” JNS.ORG