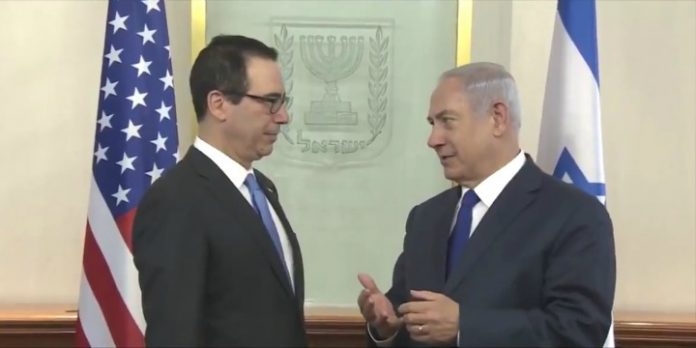 “I want to say how grateful we are for the support of the United States and the Trump administration, not only in terms of our security, which is critical for our future, but also in economic terms and the way we cooperate, and the things that we do, not only on the government-to-government level, but between Israel’s robust private sector and the great private sector of the United States,” Netanyahu told Mnuchin.

In his own remarks before cameras, Mnuchin said, “I couldn’t be more excited to be here on my first official visit, hopefully of many more. We don’t have a better partner in the region than Israel.”

According to the Prime Minister’s Office, Netanyahu thanked Mnuchin for the Treasury Department’s “strong action against the Iranian regime, especially the Revolutionary Guards and their proxy Hezbollah” — a reference to several rounds of new US sanctions imposed on Tehran-affiliated entities since Donald Trump took office as president in January.

Mnuchin arrived in Israel on Thursday after first visiting Riyadh the day before. During his regional swing, he will also stop in Dubai, Abu Dhabi and Doha.

“Our trip will include official meetings and events with leaders from Saudi Arabia, Israel, the UAE and Qatar, and with stakeholders across the region to strengthen our shared resolve to counter the financing of terrorism,” Mnuchin stated last week, ahead of his departure. “We will engage partners in the Middle East on the Trump administration’s new strategy toward countering the destabilizing influence of Iran in the region.”