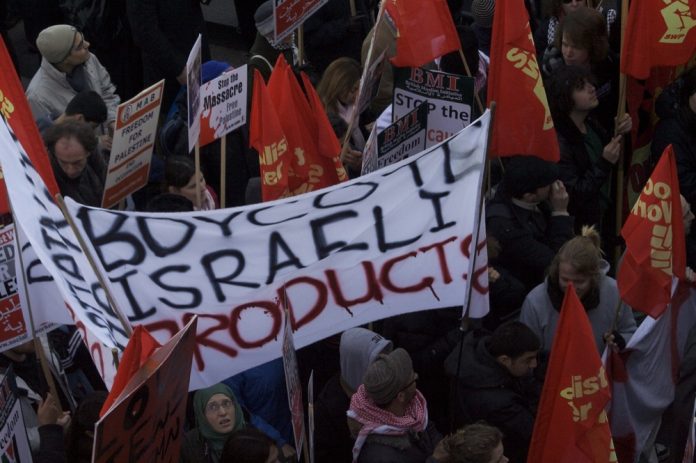 The anti-Israel movement in Ireland has suffered a major defeat. Earlier this month, the political parties working on forming the next government in Ireland eliminated a key bill that would have placed a boycott on products produced in Israeli settlements.

Jonathan Turner, chief executive of UK Lawyers for Israel, told JNS that the bill was “carefully drafted so as to pretend to be about ‘occupied’ territories generally, but in fact would apply to just one disputed territory in the world, which happens to be the heart of the ancient Jewish homeland.”

The bill, he said, was “blatantly anti-Semitic.”

Turner said there was a “serious risk” that it would be approved by the Irish parliament “because so much of the Irish political class are hostile to Israel and believe the propaganda defaming Israel.”

Had the bill passed in Ireland, noted Turner, “we feared other countries would follow.”

Ireland’s two main parties struck an agreement in May to govern together for the first time. Leaders of the Fianna Fail and Fine Gael agreed on a draft agenda for a coalition government that will include a third party, the Greens, but not Sinn Fein—and not the anti-Israel legislation, at least for now.

Sinn Fein, the political arm of the former Irish Republican Army, has long-held positions that are anti-Israel. In the most recent Irish election in February, the radical party came in third behind Fianna Fail and Fine Gael, raising fears that Sinn Fein could enter into governing coalition.

Despite robust ties between Israel and Ireland, the country has gained the reputation as one of the most critical in the European Union when it comes to the Jewish state. Ireland also has a robust BDS movement led by the Ireland-Palestine Solidarity Campaign that has long been a vocal critic of Israel and its policies towards the Palestinians.

According to Turner, this was a serious bill, cobbled together with great effort and “backed by a coalition of NGOs [GLAN, Trocaire, Christian Aid, Irish Congress of Trade Unions] determined to push it through and able to put large resources behind it.”

“A plus point of our victory is that it has been so expensive for our opponents,” quipped Turner.

When the bill was introduced in the Senate by Sen. Frances Black in January 2018, pro-Israel group Irish4Israel, with the assistance of UK Lawyers for Israel (UKLFI), took prompt action and pointed out to Irish politicians that the bill would contravene E.U. law. This remained a central sticking point throughout the ensuing debates in the Irish parliament and media.

Ignacio Wenley, Spanish Counsel for the Lawfare Project, followed up with a submission to the E.U. Commission that the bill was illegal.

According to UKLFI, the Lawfare Project and the Foundation for Defense of Democracies (FDD) also emphasized that “major U.S. companies with subsidiaries in Ireland would be exposed to serious liabilities and loss of tax benefits under U.S. law if they complied with the bill.”

“This provided an additional reason why the Irish government rejected the bill, as well as reinforcing the objection under E.U. law since it exacerbated Ireland’s potential liabilities for the breaches of E.U. law if the bill were enacted,” said UKLFI.

Turner said that prompt action on the bill, detailed analysis on how it contravened E.U. law and the possibility of a U.S. counter-boycott of Ireland all had a significant impact on the end results.

Turner added that the bill could have become law save for “a requirement in the Irish constitution that a bill for the appropriation of public money must be approved by the Prime Minister—and the minority government led by Prime Minister Leo Varadkar and Deputy Prime Minister Simon Coveney refused to approve it on the grounds that it was illegal.”

“I do not know whether the bill would have been stopped without our involvement,” he said. “It is possible that the Irish government and/or the E.U. Commission would have picked up the incompatibility with E.U. law without our assistance. But they might not.”

‘An alternative line of attack’

The new Irish government set to be sworn in will come at a time when the country, like many others globally, is facing economic ramifications as a result of the coronavirus pandemic. At the same time, Ireland is also set to take up a seat in the U.N. Security Council in 2021, giving the country an outsized voice on the international stage.

Nevertheless, given the Irish affinity for the Palestinian cause, many in Jewish and pro-Israel circles remain concerned that the country could end up enacting retribution against Jerusalem for its plan to apply sovereignty to parts of Judea and Samaria in the coming weeks.

“We see annexation as a breach of international law that is dangerous and requires a response,” Irish Ambassador to Israel Kyle O’Sullivan recently told The Times of Israel. “But we don’t issue threats; we don’t issue warnings.”

At the same time, groups in Ireland may also try to continue to push the boycott bill. While Turner was hopeful that the anti-Israel groups “will be deterred for some time by this expensive setback,” he acknowledged that they “may well try again with a similar bill in Ireland or elsewhere.”

“They will probably look for an alternative line of attack,” he said, such as “persuading Ireland and other countries to recognize a State of Palestine if Israel goes ahead with the proposal to extend Israeli law over parts of Yehuda and Shomron.”