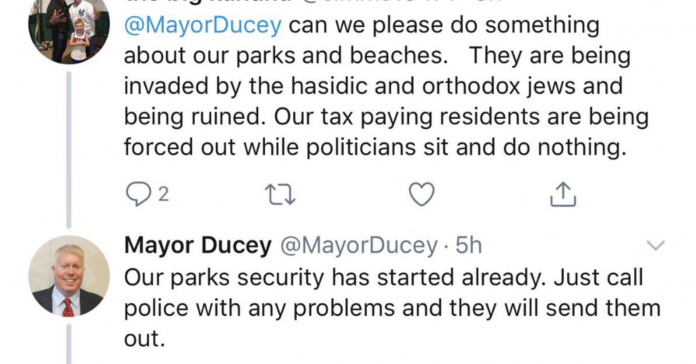 A New Jersey mayor is facing mounting backlash for telling a constituent to call the cops on Jewish people for going to the beach.

Brick Township Mayor John G. Ducey was responding to a flat-out anti-Semitic tweet by user @simms10471 Tuesday night asking: “Can we please do something about our parks and beaches. They are being invaded by the hasidic and orthodox jews and being ruined.”

“Our tax paying residents are being forced out while politicians sit and do nothing,” the user added.

Instead of condemning the tweet, Ducey, a Democrat, responded: “Just call police with any problems and they will send them out.”

Ducey later apologized for “any hurt I caused but [sic] not being careful with what I said.”