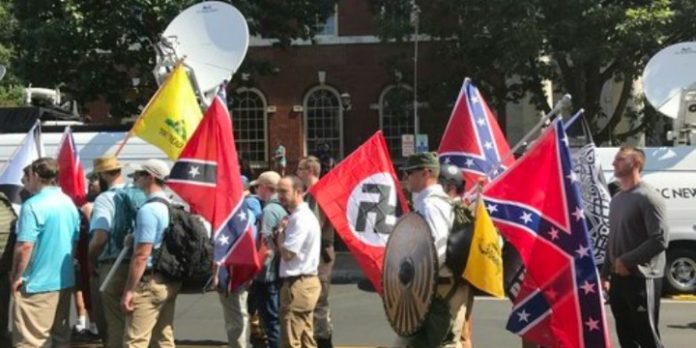 A new report by a top Jewish group in the UK explores the extent of antisemitic hate speech and incitement on the radical right, calling it “an urgent and ongoing terror threat to Jewish communities.”

The Community Security Trust stated that its report is “of essential importance in understanding the growing danger of far-right terrorism.”

The far-right also promotes antisemitic conspiracy theories, especially one that claims the Jews are organizing a “Great Replacement” of white people through mass immigration from non-white nations.

Because they have been expelled from mainstream social media, the report says, right-wing extremists have moved mainly to Gab, Telegram, BitChute, and 4chan, which are “relatively unregulated online spaces for extremists to share content that celebrates and encourages hatred and murder.”

Far-right antisemites, they report, “view themselves as part of a single global movement, with its own online language and subculture that is developed and sustained on these platforms.”

The material they collected is so inflammatory, the CST stated, that most could not be published and is being shared privately with law enforcement and government officials.

Nonetheless, they said, these materials pose “an urgent and ongoing terror threat to Jewish communities.”

Urging governments and law enforcement to formulate a global strategy to deal with the threat, the CST said, “The consequences of inaction are clear. Until this hate fuel is challenged and comprehensively removed, it is likely that further acts of violence will continue or worsen.”