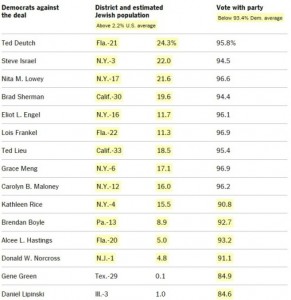 The New York Times on Thursday invoked the ire of the Twittersphere in publishing a list of American lawmakers opposed to the Iran nuclear deal and identifying them as Jewish or representing heavily Jewish districts.

In an infographic tallying members of Congress’s stance on the nuclear accord reached between Iran and world powers earlier this summer, the paper notes that “Though more Jewish members of Congress support the deal than oppose it, the Democrats against the deal are more likely to be Jewish or represent Jewish constituencies.”

The article came out ahead of the long-anticipated vote in Congress on the Iran nuclear deal reached between the P5+1 nations and Tehran in July after years of negotiation.

A disapproval resolution for the agreement on Thursday fell two votes short of the 60 needed to move forward as most Democratic and independent senators banded together against it.

The Times’ charts highlighting the names of Jewish lawmakers and listing the estimated Jewish populations of their districts in yellow particularly irked social media users.

Journalists and activists launched numerous tirades against the paper for what they deemed a tasteless highlight of the Jewish identity of lawmakers, making frequent allusion to Nazi Germany’s identification of Jews with yellow star badges.

Click here to view the full chart at the NEW YORK TIMES.