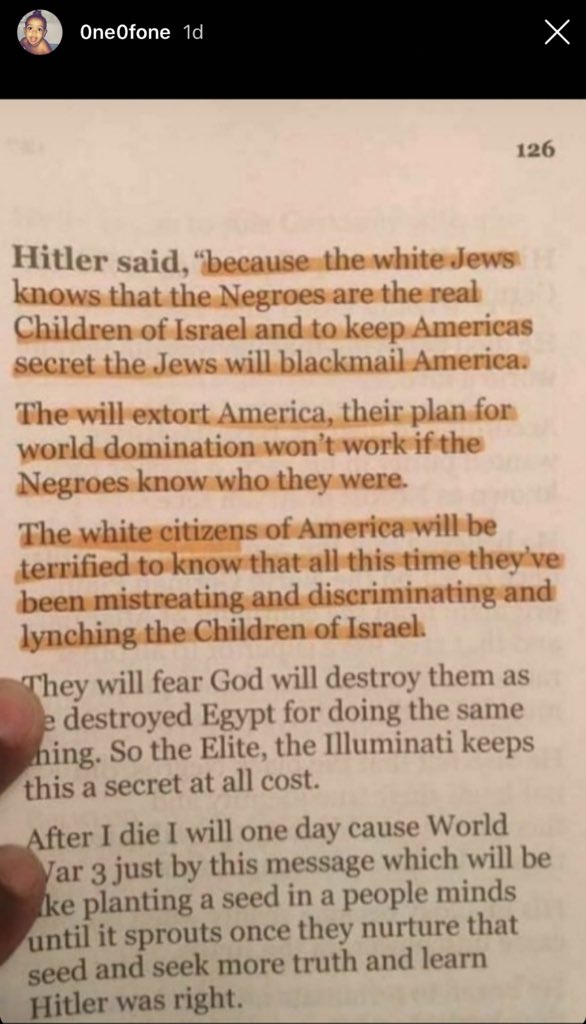 At some point over the July 4 holiday weekend, Jackson posted a single Instagram story to his 1.4 million followers showing an image of a book page containing quotes from Hitler allegedly saying “the white Jews knows that the Negroes are the real Children of Israel,” that they “will extort America” and that “their plan for world domination won’t work if the Negroes know who they were.”

According to Snopes.com, Hitler never said the quotation highlighted by Jackson. The fact-checking site says the passage “originated in an unsourced article published by a disreputable web site” and “appears to loosely string together an entire ecosystem of impossibly farfetched and completely unsourced conspiracy theories.”

In an Instagram post Sunday, Jackson posted an image of Farrakhan, whom the chief executive of the Anti-Defamation League has described as a purveyor of “serial, congenital anti-Semitism.” Jackson called the Nation of Islam leader “powerful.”

Jackson highlighted the “world domination” passage from the alleged Hitler text in an Instagram story post on Monday:

Also Monday, Jackson again published an unedited image of the page in question, this time adding a caption saying “anyone who feels I have hate towards the Jewish community took my post the wrong way” and that “I have no hatred in my heart towards no one !! Equality Equality”.

Neither the Eagles nor the NFL have yet to comment as of Tuesday morning. But Joe Banner, who was Eagles team president when the team drafted Jackson in the second round of the 2008 NFL draft and is of Jewish descent, condemned Jackson’s comments on Twitter: “If a white player said anything about AA’s as outrageous as what Desean Jackson said about Jews tonight there would at least be a serious conversation about cutting him and a need for a team meeting to discuss. Which would be totally appropriate. Absolutely indefensible.”