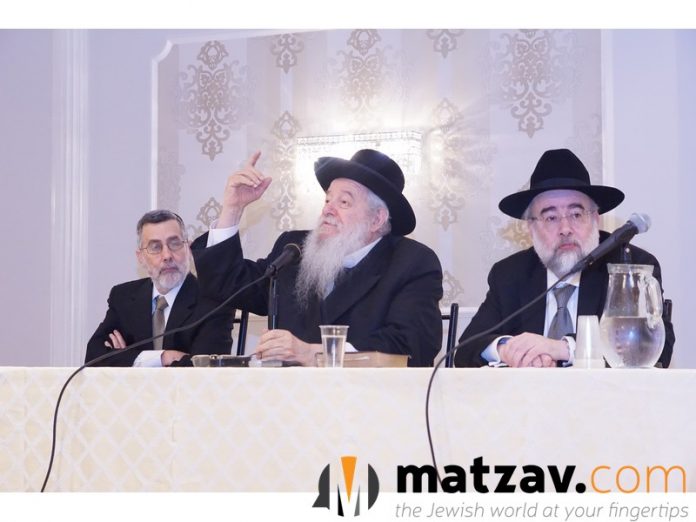 >>Follow Matzav On Whatsapp!<<
At the OU’s Kashrus conference this past week, there was palpable excitement as the Novominsker Rebbe, Rabbi Yaakov Perlow, addressed his captivated audience:
“It’s a privilege for me to be here, because I know that this assembled tzibbur here today represents the community of people that makes it possible for so many thousands of yidden to eat kosher,” he said. “It’s a zechus to keep Klal Yisroel going this way….Baruch Hashem, in the years since the end of WWII, we’ve seen an aliyah, you can almost call it a renaissance of our Torah tzibbur of this country, which did not exist before the war. There were problems with Shabbos, with chinuch, and there were problems with kashrus also…The growth of our tzibbur, the ruchniyus, is due to the fact that there came an organization called the Orthodox Union and other groups as well, that take a lot better care of the kashrus situation of the products that we eat, and that enabled our lives to be open to all the other devarim sheb’kedusha, our families, our mosdos.”
“All the mitzvos and maasim tovim that yidden do, have to have a lev pasuach (a receptive heart),” the Rebbe continued. “Rabosai, it’s a privilege to be here because what you’re doing is making it possible for thousands of yidden to have a lev pasuach to devarim sheb’kedusha.”
“When I invited the Rebbe, he immediately agreed,” said Rabbi Moshe Elefant, COO of OU Kosher. “He told me that he is willing and anxious to join us.”
“We are honored that the Rebbe joined us for this critical event, as our rabbonim from all across the country gather together,” said Rabbi Menachem Genack, CEO of OU Kosher. Gary Torgow, Chair of the OU Kashrus Committee, Chairman of Chemical Financial Corporation, and noted philanthropist, offered remarks as well.
The annual Kashrus conference was held in Paradise Manor, in Borough Park, and had 120 participants. As is typical at OU conferences, in an incredible demonstration of achdus, rabbonim from OU Kashrus from all over North America and Latin America, and beyond, were in attendance, including rabbonim, mashgichim, sons of prominent Admorim, and other Kashrus professionals who oversee hashgachos (literally) across the globe.
Over the two days, the world’s premiere kashrus experts shared their insights, techniques and teachings. Participants received an update on OU kashrus in the Far East, as well as mobile electronic integration of kashrus tools for mashgichim.
The opening session, led by Rabbi Simcha Smolensky and Rabbi Avrohom Stone, focused on inspecting unusually complex factories, as well as dealing with potential kashrus infractions and fraud schemes.
Rav Hershel Schachter, shlita, who serves as OU Posek, delivered divrei chizuk, especially pertaining to the challenges of being a mashgiach on rough assignments and away from family for extended periods of time. Rav Schachter also shared some personal, sage advice on kashrus surveillance.
Participants also studied the unique kashrus systems of a new greenhouse produce company, Kosher Gardens, were presented by Kosher Gardens’ COO Chesky Seitler, with a halachic overview by OU Rabbinic Coordinator Rabbi Dovid Bistricer and a shiur on Bedikas Tolaim by Rabbi Dovid Goldstein, Rav Hamachshir of Kashrus Le’Bedikas Tolaim.
Kosher winemaking is an incredibly sensitive endeavor, with restrictions that must be implemented from pre-grape crush through wine bottling and labeling. Two of the OU’s wine and liquor kashrus experts – Rabbi Reuven Nathanson and Rabbi Nahum Rabinowitz – presented the intricate details of the process by way of a shiur, with explanatory photos, followed by a first-person depiction of the process. The extreme precautions that must be taken, including all wine crushing equipment being operated only by Shomrei Mitvos, and the systems of bishul, kashrus security seals and layers of verification that go into kosher wine production, were among the issues discussed.
{Matzav}