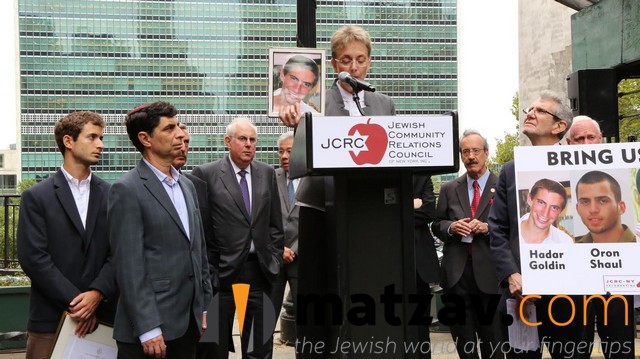 A group of New York lawmakers and Jewish communal leaders came together to launch a coordinated effort to condemn Hamas for holding the bodies of two deceased Israeli soldiers and two Israeli civilians currently being held captive.

The effort, spearheaded by the Jewish Community Relations Council of New York (JCRC-NY), seeks to have Congress, the New York State Assembly and Senate, as well as the New York City Council, condemn Hamas’ actions.

“This is a significant humanitarian effort being initiated from Congress down to the city level to send a clear and direct message to Hamas to return the bodies of these dead soldiers and two living Israel citizens who suffer from mental illness on humanitarian grounds,” JCRC-NY President Charles S. Temel said in a statement.

Leah Goldin, the mother of Israeli soldier Hadar Goldin, whose deceased body was taken captive by Hamas during Operation Protective Edge in 2014, also attended the rally to push for his return. Goldin, and her husband Simcha Goldin, also traveled to New York this week along with Israeli Prime Minister Benjamin Netanyahu to call on the United Nations to take responsibility in returning their son’s body.

“Our son was killed during the summer of 2014 during a United Nations sponsored ceasefire and since then has been denied the basic human right to the dignity of a proper burial according to our customs,” Leah Goldin said at the press conference.

“We appreciate the work of the representatives of New York and JCRC-NY for bringing this grave matter of the violation of human rights still being committed against my son and the other hostages of Hamas.”

In addition, Hamas is also holding the body of Oron Shaul, also killed during Operation Protective Edge. Two civilians, Avera Mengistu and Hisham al Sayed, who both have documented special needs, accidentally crossed into Gaza and are being held by the terror group.

“It seems that every time the U.N. convenes, we have another international situation that needs to be dealt with,” New York City Comptroller Scott Stringer said. “What I would say to the U.N. is, ‘This is what you’re built for, this is what you should be known for,’ to create a level playing field, to cut out the nonsense, to call out Hamas for exactly who they are, a terrorist organization that is bringing great sadness and harm to a family that loves their soldier son so very much.” JNS.ORG