As Wall Street still wobbles under the pressure of a weak economy, one New York asset class stands firmly on all four wheels. Taxi medallions – required licenses fastened to the hoods of all New York City yellow cabs – have rocketed in value at a time when many investments have plummeted. The average rate in July for a corporate-licensed taxi medallion in the Big Apple was a record $766,000 – up 126% from $339,000 in 2004.

“It is an industry that has always gone up,” says Andrew Murstein, president of Medallion Financial. “It has outperformed every index you can think of – the Dow, Nasdaq, gold, you name it.”

A leader in the industry for years, Medallion Financial owns and leases several hundred medallions and has financed the purchase of thousands more, in Chicago, Boston and elsewhere – but mainly in New York. Many New York drivers, most of whom are immigrants, take out loans from Medallion Financial when buying a medallion.

In a ratio set by law, 40% of New York’s 13,257 medallions – a number strictly controlled by the city – are designated for individual, as opposed to corporate, ownership. Individual owners are required to drive at least part time, while corporate owners have the option of hiring an agent to lease the medallion full time for up to $800 a week. 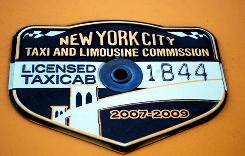 For Murstein, recent price surges are not surprising; medallions have seen an average 15%-a-year appreciation for 70 years, he says.

“Not only do you get that 15% for your price appreciation, you also get rental income,” Murstein says.

With the slogan, “In niches there are riches,” the company has lent more than $3 billion to the taxi industry in the past decade and recorded no loan losses because it can repossess the medallion if the client doesn’t pay. But Murstein says the medallion loans, on which the company currently charges about 6.25% interest a year, give ambitious drivers a legitimate opportunity for ownership.

Matthew Daus, chairman of New York’s Taxi & Limousine Commission (TLC), credits the steady rise in medallion prices to the record numbers of taxi drivers looking for shifts. Currently, there are more than 46,000 cabbies licensed in New York, creating heated competition for the 13,000-plus medallions.

Not everyone is happy with the tight supply of medallions and the ever-rising cost, which is passed on to cabbies who can’t afford to buy their own. Driver Zafar Raja, 36, who moved to New York from Pakistan in 1996, says the abundance of drivers has led to rising lease rates that require him and others to work “too many hours” to cover their costs.

“Brokers are doing whatever they want, and you can’t argue, because there is no job security,” Raja says. “I know someone who is paying $900 for a single-driver weekly night shift.”

Daus contends the TLC caps the maximum weekly lease rate at $800. Besides, drivers who are able to purchase their own medallion often make very good livings, Daus says. And if history is any guide, they ultimately can sell their medallion at a healthy profit.

After more than a decade of leasing a medallion, Victor Salazar, 45, who moved to New York from Ecuador in 1991, took out a loan in 2004 to buy a medallion for $305,000. Salazar, who drives regular night shifts, says owning a medallion is essential to making taxi-driving a career.

“Other drivers have to worry about catching up to pay the lease,” Salazar says. “There is a lot of stress. I know, because I used to be one of them.”

Daus says the financing provided by Medallion Financial is key for many cabbies to make that transition to ownership, and that the company’s mission seems to be “helping people achieve the American dream.”

“There’s no question that many immigrants – my parents included – came here without any substantial backing of education or people who could provide funds, or the sophistication required to go into business,” Cuomo says. “Being able to own a taxi is a quick way into business. It is an opportunity for them to be their own bosses.”

Murstein knows the story well. His grandfather Leon Murstein, an Argentinean immigrant who started the family business decades ago, amassed a fleet of 500 medallions after purchasing his first in Queens in 1937.

Medallions went for $10 that year.