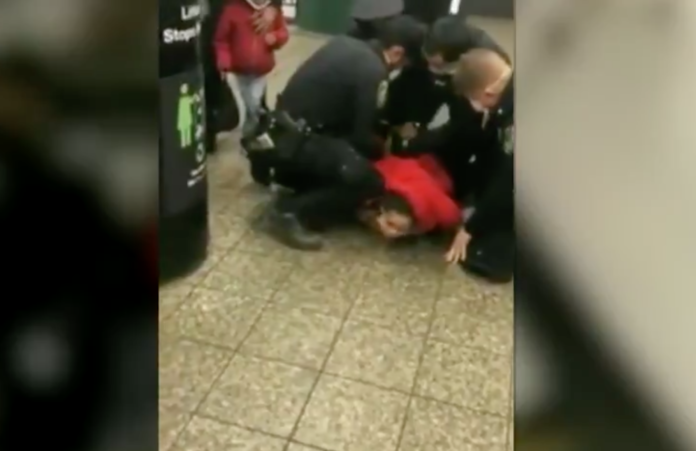 The New York Police Department is facing backlash after video on social media showed officers forcing a mother to the ground and handcuffing her in front of her young child after a confrontation over how she was wearing her face mask, Newsweek reports.

In video published online, 22-year-old Kaleemah Rozier and her child are seen being escorted up the stairs from a subway platform by police. The mother is heard shouting “Don’t touch me” before seen to be slapping away the hand of an officer. Multiple officers then crowd around the mother before forcing her to the ground and handcuffing her as bystanders urge them to stop, saying: “This is unnecessary.”

NYPD officers escorted a young woman with her toddler (both wearing masks) up the subway platform stairs, then forced her to the ground & handcuffed her, in Brooklyn this afternoon.

In a statement sent to Newsweek, an NYPD spokesperson said the altercation took place at around 11:50 a.m. on Wednesday at the Atlantic Avenue/Barclay Center Subway Station after police officers stopped the mother for not “properly wearing” her face mask.

“She responded to the officers with vulgar language and repeatedly refused requests to properly wear her face covering over her nose and mouth,” the spokesperson said. “Officers then informed her she would be ejected from the station and began to escort her from the location.”

Rozier was charged with resisting arrest, disorderly conduct and harassment, the spokesperson said. She has since been “released on a Desk Appearance Ticket.”

Mayor Bill de Blasio on Wednesday night reacted to the video. “Face coverings are important to protect everybody — they’re not optional. But no one wants to see an interaction turn into this,” de Blasio tweeted. “We’ve made progress with de-escalation. This isn’t it.” Read more at the NY Post.

And read more at Newsweek.