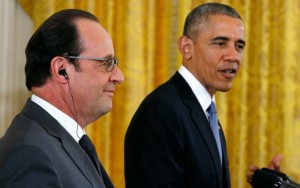 “Next week I will be joining President Hollande and world leaders in Paris for the global climate conference,” Obama noted at one point. “What a powerful rebuke to the terrorists it will be when the world stands as one and shows that we will not be deterred from building a better future for our children.”