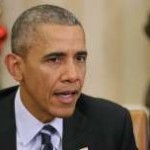 President Obama said Wednesday’s mass shooting in Southern California is possibly related to terrorism, but authorities still are not sure of the reason behind the attack.

“At this stage we do not yet know why this terrible event occurred,” he said Thursday in a rare statement from the Oval Office. “It is possible this was terrorist-related but we don’t know. It’s also possible this was workplace-related.”

Obama said federal investigators will get to the bottom of yesterday’s shooting, but cautioned against rushing to judgment about the shooters’ motives.

“We are going to be vigilant as we always are in getting the facts before we issue any decisive judgments on how this occurred,” he said.

Wednesday’s attack in San Bernardino, Calif., killed 14 people, making it the deadliest mass shooting in the U.S. since the 2012 massacre at Sandy Hook Elementary School in Newtown, Conn. left 28 dead.

Two suspects in the shooting were a married couple with a child.

Their Muslim backgrounds have prompted fears that the incident was tied to radical Islamic terrorism.

Farook was reportedly attending a holiday party at the Inland Regional Center, where the shooting took place, causing others to believe it was a workplace dispute.

“There may be mixed motives involved in this, which makes the investigation more complicated,” Obama said.

Noting that the two suspects were carrying guns and had other heavy weaponry at their home, the president reiterated his call for lawmakers to pass tougher gun laws.

“More broadly, we see the prevalence of mass shootings, and I think so many Americans sometimes feel as if there is nothing we can do about it,” he sad.

He praised law enforcement for their response to violent incidents, but said “we can’t just leave it our professionals to deal with the problem of these kinds of horrible killings. We all have a part to play.”

Obama said lawmakers at the state and federal level must “see what we can do” to make it harder to buy guns.

“Because right now it’s just too easy,” he said. “We are going to have to search ourselves as society to take basic steps to make it harder, not impossible but harder, for some people to get access to weapons.”