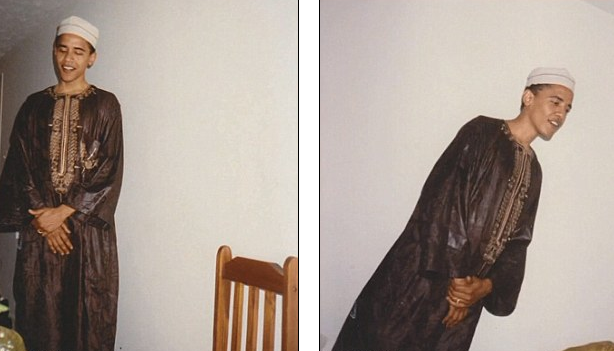 Bill O’Reilly shared photos of Barack Obama in traditional Islamic dress on his program Wednesday night, claiming they were from his half-brother Malik’s wedding, THE DAILY MAIL reports.

The Fox News host said it was ‘very difficult’ to verify the exact location of the photographs – a similar set of which were first released back in 2004 by Malik and previously published on DailyMail.com – but claimed they were taken in Maryland in the early 1990s.

‘According to his half-sister, Barack Obama attended his half-brother’s wedding in the early 1990s. Malik Obama was a Muslim,’ said O’Reilly. ‘The Factor has obtained pictures allegedly from that wedding, which we believe was held in Maryland.’

O’Reilly used the photos in a monologue alleging the President’s ‘deep emotional ties to Islam’ have stopped him effectively combating ISIS while also saying he believes the photos prove that President Obama is not a ‘devout Christian.’