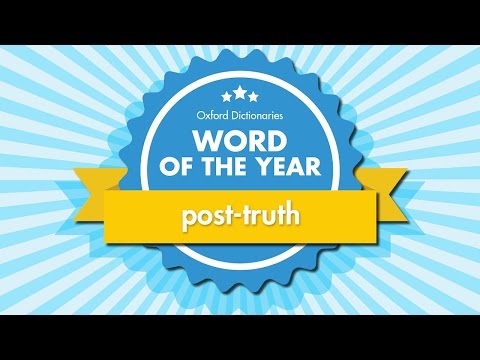 LAW STREET MEDIA reports: The Oxford Dictionaries declared “post-truth” the word of the year after Brexit and the U.S. election led to a surge in the use of the term. Both the Brexit and Trump campaigns were defined by appealing to people’s emotions rather than logic, statistics, or facts. Oxford Dictionaries defines the word as, “Relating to or denoting circumstances in which objective facts are less influential in shaping public opinion than appeals to emotion and personal belief.”

The word has been around since at least 1992, but with all of the political drama in the past year, its use has increased by 2,000 percent. “We first saw the frequency really spike this year in June with buzz over the Brexit vote and again in July when Donald Trump secured the Republican presidential nomination,” said Casper Grathwohl, president of Oxford Dictionaries. He said that use of the word spread as fast and wide as it did thanks to social media, and a growing distrust of facts offered by politicians and media. “Given that usage of the term hasn’t shown any signs of slowing down, I wouldn’t be surprised if ‘post-truth’ becomes one of the defining words of our time,” Grathwohl said.

The word “post-truth” is strongly associated with politics, and often communicated via social media, where many people get their news. “I think it reflects a trend of how emotion and individual reactions are becoming more and more important. People are restricting their news consumption to sources that don’t claim to be neutral,” said Charlotte Buxton, an editor at Oxford Dictionaries.