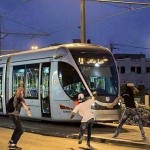 Al-Hayat Al-Jadida, the official Palestinian Authority daily, has encouraged Palestinians to continue throwing rocks at Israelis and to defend and save the Al-Aqsa Mosque and Yerushalayim. On Wednesday it published a cartoon encouraging children to throw rocks.

Hafez Al-Barghouti, a columnist for the official PA daily, wrote on July 23, 2015, that rock-throwing “is permitted…since international law permits whoever is under occupation to resist through all possible means.”

As reported previously by Matzav.com Israel, Alexander Levlovich was attacked and killed by Arab rock-throwers as he was driving home on Rosh Hashanah in the Yerushalayim neighborhood of Armon Hanatziv, also known as East Talpiot.

Nava Segev, who has lived in the neighborhood for over 40 years, said the windows of her home have been broken multiple times; her garden has been set on fire. At night, there are parts of her house she must stay out of for fear of being hit by an incoming rock or bottle.