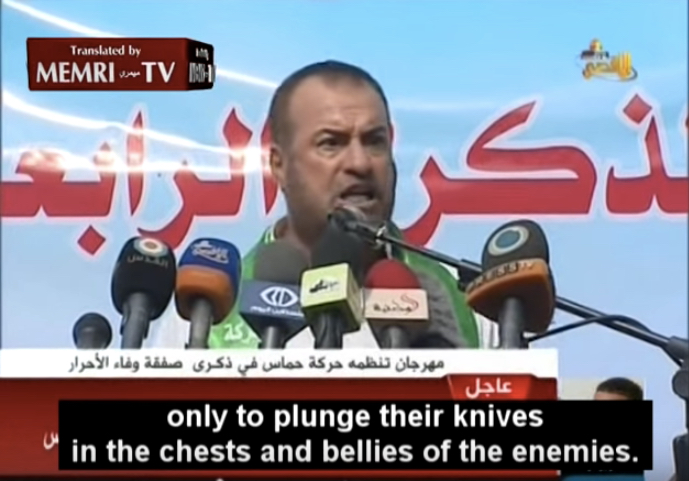 Fathi Hammad said that he is pleased to be named a “global terrorist” by the United States.

On Friday, the U.S. State Department branded the senior Hamas leader a “specially designated global terrorist.” This is a rarefied list of international enemies belonging to organizations such as al-Qaida, Boko Haram, Hezbollah, the Taliban, the Jewish Kahane group, Algerian Salafists, the Islamic State and Hamas, among others.

On Saturday, Hammad told The Washington Post: “The decision only makes me more confident about my path. The threat of killing or arrest? It doesn’t freak me out, not at all. I am looking forward to it.”

Hammad said, “I feel proud that I managed to anger America.”

Then he added, “I don’t know why they picked me.”

The United States charged that Hammad, 55, a former interior minister for the Hamas government in the Gaza Strip, coordinated terrorist cells. No evidence was presented. The designation also said that Hammad is a director of Al-Aqsa TV, “which is a primary Hamas media outlet with programs designed to recruit children to become Hamas armed fighters and suicide bombers upon reaching adulthood.”

Why the State Department decided to name Hammad as a global terrorist now is unclear. It is well known that Hammad founded the TV station, but it went on air soon after Hamas, an Islamist militant group, took control of the coastal enclave in 2007.

Now Hammad is a man back in the news, for all the wrong reasons.

Over the past two years, Israeli media have reported that Hammad fled Gaza (untrue) after the war with Israel in the summer of 2014.

The Israeli media said the reason for his flight was that Hammad was working for the Israeli intelligence service Mossad. (Hammad strenuously denied this.) There are few things worse for a resident of Gaza than to be accused of collaborating with the Israelis – a crime that can lead to a secretive trial and public execution.

Hammad, in a statement, called that assertion “completely detached from reality.”

The Times of Israel in 2015 called Hammad “one of the most radical figures in Hamas today.”

In Gaza, Hammad has predicted that Israel would cease to exist by 2022.

Many in Gaza view him as powerful but extreme – and something of a loose cannon. Even some in Hamas keep Hammad at arm’s length.

Hammad gave a news conference Saturday night at his walled four-story home in Beit Lahiya, in the north of the Gaza Strip. Afterward in his salon, Hammad sat on a couch and spoke with The Post.

“I don’t know why they pick me, you should ask the Americans about this, not me,” Hammad said. “I am a founder of Al-Aqsa TV, and I was the minister of the interior, and I can’t understand what’s wrong with that.”

He said, “The Americans always claim that they stand by oppressed people and they stand by the Palestinians, but in reality, they do not.”

“I would like to deliver a message to the American people,” he continued. “Your administration is cheating you, the president is lying to you. They are taking your money, money that should spent on health care, on education, on poor people, and they give it to Israel, which is the biggest sponsor of terrorism in the world.”

Hammad was referring specifically to the announcement last week that the United States was awarding Israel a 10-year, $38 billion military-aid package, the largest in U.S. history.

Hammad spent six years in an Israeli prison, from 1988 to 1994. He also has been arrested three times by the Palestinian Authority, the Hamas rivals who run the West Bank, and has spent almost two years in Palestinian jails.

Now that he is labeled a global terrorist, his freedom of travel and his financial transactions will be even more limited, the State Department said.