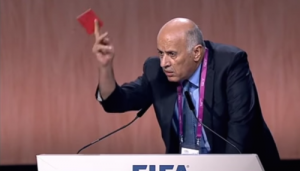 A senior Palestinian official, Fatah Central Committee member Jibril Rajoub, is warning that moving the US embassy from Tel Aviv to Yerushalayim by the new Trump administration would be viewed as an act of war against the entire Muslim world.

“In our opinion, moving the embassy to Yerushalayim is a declaration of war against Muslims,” said Rajoub, one of the most senior men in Palestinian Authority President Mahmoud Abbas’ Fatah party.

“It is not unthinkable that the United States will give the Jews the keys to the holy sites in Yerushalayim, sites that are sacred to both Christians and Muslims. If someone among you thinks there won’t be ramifications, he is making a grave error. We are talking about a risky step that won’t bring stability to the ground… It goes contrary to previous United Nations resolutions and the policy of the United States since 1967. We don’t plan on waving a white flag [of surrender in front of PM Netanyahu or Trump].”