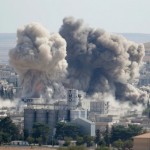 According to the Pentagon, “evidence gathered during the investigation indicates that the airstrikes likely resulted in the deaths of four non-combatants.”

Additionally, “one of the non-combatants may have been a child.”