The Press-Enterprise reports: The brew to make kosher pickles includes tap water, kosher salt, dill, garlic, pickling spice and, of course, cucumbers. The class of about 40 who learned how to make kosher pickles Sunday at the Jewish Community Center in Riverside was multicultural. The teacher was Rabbi Shmuel Marcus, the Los Alamitos resident who calls himself the Pickle Rabbi. He’s offered his culinary and religious lessons in 150 cities. There was sugar, too, in the rabbi’s wit and wisdom that enthralled men, women and children who snacked on nonkosher pickles while making the kosher variety. Linda Musser, a teacher at Woodcrest Christian High School in Riverside, came to absorb Jewish culture to pass on to her ninth grade students.”To me it’s a cultural experience,” said Musser, a Riverside resident. “I’ve learned a lot.”

Musser wanted to experience Judaism to pass on to her students.

“I want them to understand one of the books (“The Chosen,” by Chaim Potok) we read which has a lot of Judaism in it,” she said. 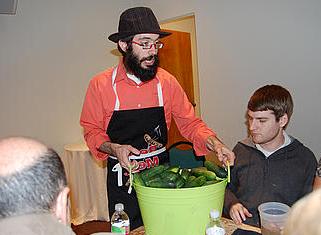 “He was very informative, very entertaining,” said Hill. “He was very talented at striking a balance between the spiritual.”

“I love kosher pickles,” said Young, who used to live in a Jewish neighborhood in New York City. “I’ve read a lot about Jewish things. It was nice to see it in real life.”

Most of the people in the audience were Jewish. Deborah Norys, of Riverside, brought her two children, Jacob, 11, and Rachel, 9, while her husband was golfing.

About 40 people turned out for the event, which mixed a kosher favorite with splashes of Jewish culture. Rabbi Shmuel Marcus has offered the class in more than 150 cities.

“Our learning was beyond the pickles, the heritage,” Norys said.

Each member of the audience made five pickles. Elizabeth Cohen, of Riverside, said she promised one to a friend and the others to her children.

The students were told the pickles could be eaten on Thursday. “I’m looking forward to see what the pickles taste like,” said Josh Schiffer, of Riverside.

The session that lasted about 90 minutes had the appearance of a high school chemistry class with the students sitting at three long tables.

A 4-foot-long plastic pickle adorned a table near the lectern that Marcus used. A tub of 200 cucumbers to be used sat nearby. A bag of garlic was at hand. Each table had pitchers of water for the pickle brine. There were containers of kosher salt.

Marcus started by saying kosher means “fit for use.” He added that the kosher food business grosses $3 billion a year. “It’s a big industry,” he said.

Before instruction began, Marcus blessed the pickles in Hebrew.

Shmuel M. Fuss, the Riverside rabbi who runs the Chabad center, said, “Our slogan is: Your home for everything Jewish.”

He said the workshop was part “of our ever-going quest to provide Jewish life to the public.”