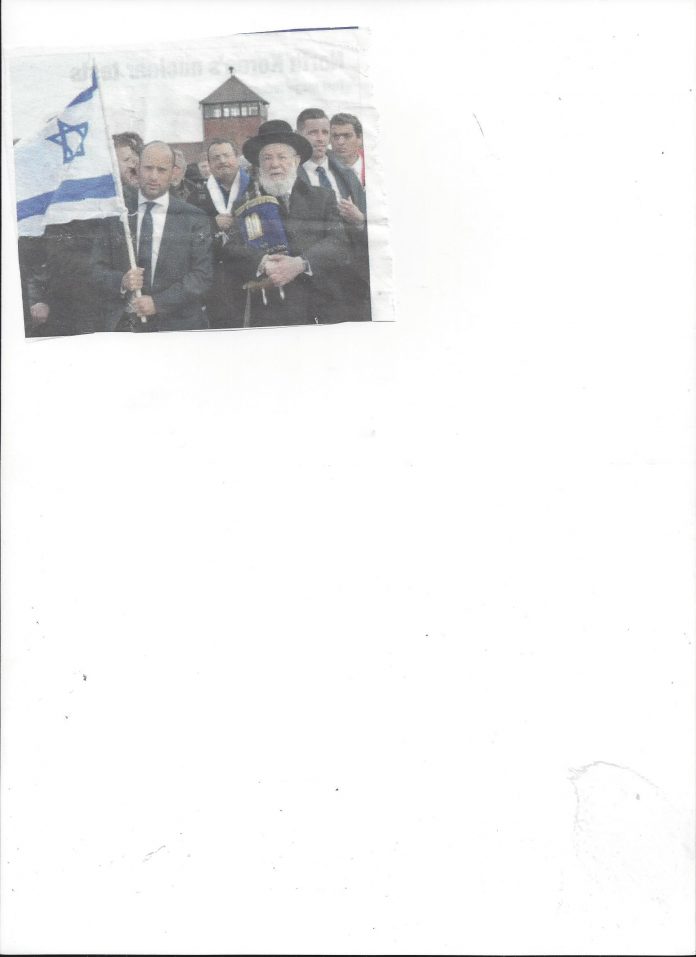 They bring him to shul daily – I see him all the time. The other day he gave me a robust Brocha; as a zakein muflag of 100 years. He sounds chipper and spry, with fealty to the One Above who has granted him longevity. I saw the tattooed number on his left hand as he wore Tefillin; somehow you get the sense this man’s grasp of life, of the death camps he endured, supersedes the pageantry and drama of anyone in this photo. His worldview is emuna pe’shutah – simple faith in the Supreme Entity. Everything else is irrelevant.

His message is; sure, don’t be naive. A person must be proactive to defend oneself in times of peril, r”l, but in the endgame, Al’mighty has the final say.
This etho is burnished in the Jewish consciousness and is 3,000 years old.
Connect the dots to our present Mid-East situation. What would this man’s reaction to Prime Minister Netanyahu’s remarks be?
A few years ago, citing the Iranian existential threat, the Prime Minister said, “For not in one generation do they rise up to destroy us, but in every generation they attempt to annihilate us.” –

Obviously, a quote from the Haggada, of Pesach eve, but Netanyahu curiously deleted the key phrase of the Exodus narrative: “V’Hakadosh Boruch Hu matzileinu m’yodom!”

The Rosh Memshala is consistent. In his address to Congress two years ago, chastising Iran for its nuclear program, he proclaimed that the Purim festival of ancient Persia is right around the corner.

“Esther gained permission for the Jews to defend themselves. We used to be passive, but no more!” In a classic turnabout ‘V’nahapoch hu,’ the Prime Minister turned Purim on its head.
The message of the Feast of Lots is that current world events are Almighty’s jigsaw puzzle; part of His Master Plan. It is He who charts the course of human events, even as we speak.

In China – referring to the Jewish refugees of Shang Hai, [the Mirrer talmidim] he said, “Back then, we didn’t have a country – today we can defend ourselves.”

History plays tricks on the dead. If the Mirrer Pleitim, ‘nishmosom aden,’ could speak, they would proclaim in unison, ‘Not so! Our ordeal was a ‘Nes Hatzolah’ ordained on High.’
Their ideology, borne of their life experience, does not comport with Netanyahu’s at all.
They would exhort us all, it is the centenarian in Shul who has it right – his philosophy is the authentic time-tested formula for Jewish survival.

They will testify that the Holocaust took place for the same reason that back in 1997, ‘Shayetet 13’ – an elite commando unit, Hy”d, perished as they entered Lebanon via the Mediterranean Sea as frogmen on a covert mission. They were lured into a minefield – an ‘olive grove,’ by a Lebanese double agent and met an untimely end. Would you say did they left this world katzon lativcha – as sheep to the slaughter? They passed away because the Boreh Olam willed it so. Likewise, the giborei koach, giants of the spirit – the six million, was a decree from Heaven, and they accepted Almighty’s will. When He decides that something will take place, Gadi Eizenkoff, Benjamin Netanyahu, and the rest of us are spectators as events unfold. But Mr. Netanyahu doesn’t get it.

Israelis marvel at their military prowess, but just mention how Iran is nestled in Syria to create a hegemony, and you will see fear in their eyes.

The Gemara [see Yoma 9a] alludes to ‘Poras’ or Iran’s meteoric ascent in the world, in the days preceding the Geulah. Obviously, the Chachmei HaTalmud saw the roadmap of the achris hayomim; History and world events, are a work in progress, a manifestation of a Divine script.’ If one examines the current Mid-East situation, a region in flux, one has some inkling of Hashem’s Master Plan taking shape.

It is time for us all to embrace the inescapable truth.