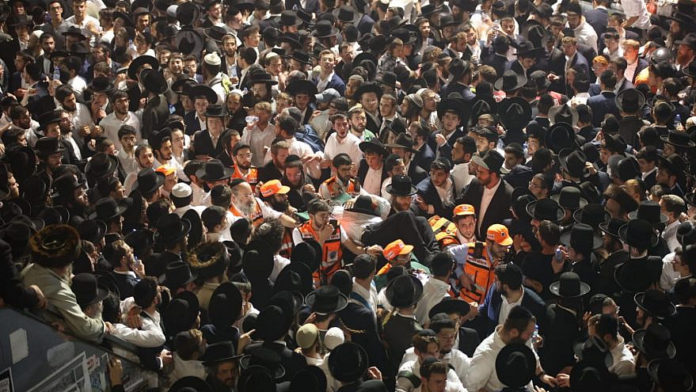 Two senior Toldos Aharon chasidim were reportedly questioned under caution by police this week in an investigation of the Lag Ba’omer disaster at Meron, which left 45 people dead in Israel’s worst-ever civilian disaster.

Those questioned were “operations officers” for the Toldos Aharon chasidus who had a major part in organizing Toldos Aharon’s compound at the Lag B’Omer event in Meron, where the disaster happened, the Kan public broadcaster reported Monday.

The report said the pair had been questioned Sunday and Monday for many hours.

It was the first time chasidic figures involved in the organization of the event were being interrogated, the report said. Police have questioned some 20 people in total, including security and safety staff and officials in the National Center for the Development of Holy Places.

However, the future of the police probe is unclear after the new government led by Prime Minister Naftali Bennett on Sunday approved a proposal by Defense Minister Benny Gantz and Finance Minister Avigdor Liberman to establish a governmental commission of inquiry into the tragedy.