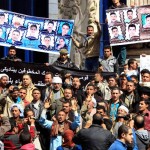 Egyptian public perception views Israel as the most hostile state, according to a poll conducted in May 2015 and reported by the Egyptian Center for Public Opinion Research this week analyzing the perceived hostility or friendliness of 26 countries.

Saudi Arabia was found to be the most friendly country toward Egypt, followed by the UAE.

Israel was ranked as the most hostile country, with the U.S. second.

Earlier this month, a high-level Egyptian source said that relations between Israel and Egypt are perhaps the best they’ve ever been, because of ongoing security coordination.