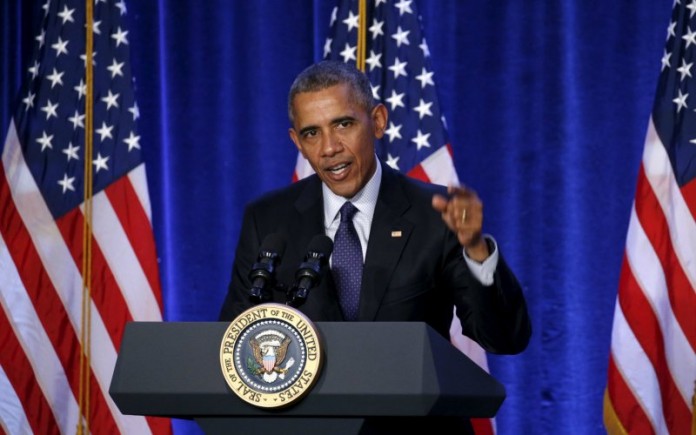 President Barack Obama will make a historic trip to Hiroshima, Japan, on May 27, becoming the first sitting U.S. president to visit the site of the world’s first atomic bombing.

The White House formally announced the visit Tuesday after weeks of speculation that Obama would stop in the city after attending the Group of 7 economic summit in Ise-Shima. The president is expected to deliver a speech on nonproliferation of nuclear weapons.

Japanese Prime Minister Shinzo Abe will join Obama on the visit, where the president will “highlight his continued commitment to pursuing the peace and security of a world without nuclear weapons,” the White House said in a statement.

Obama aides say there will be no presidential apology for the U.S. decision to drop the atomic bomb on Aug. 6, 1945, which killed an estimated 140,000 people in Hiroshima. Three days later, a second atomic bomb killed up to 80,000 people in Nagasaki.

“He will not revisit the decision to use the atomic bomb at the end of World War II,” White House deputy national security adviser Ben Rhodes said in a blog post. “Instead, he will offer a forward-looking vision focused on our shared future.”

Critics, including many conservative news outlets, have called a visit unnecessary and framed a potential trip by Obama as an apology for an act that helped bring the war started by Japan to a quicker end, saving lives of U.S. service members.

But the White House believed the time was right, in Obama’s final year, to make a grand symbolic statement toward the president’s disarmament goals that he announced during his first year in office. Though Obama has made only modest progress in that effort, aides said the trip would allow the president to focus international attention on the issue at a time when presumptive Republican presidential nominee Donald Trump has suggested Japan and South Korea develop their own nuclear weapon arsenals in the face of threats from North Korea.

“Hiroshima is a deeply moving place to visit and to contemplate the terrible destructiveness of war,” Pelosi said in a statement.

Rhodes emphasized that Obama will pay homage to U.S. service members who fought in World War II: “Their cause was just, and we owe them a tremendous debt of gratitude.”

He added that “the visit will also symbolize how far the United States and Japan have come in building a deep and abiding alliance based on mutual interests, shared values, and an enduring spirit of friendship between our peoples.”

Kevin Martin, president of Peace Action, which advocates for the abolition of nuclear weapons, said that Obama must take concrete steps toward that goal.

“It’s not enough to repeat the words Obama has said several times since his historic Prague speech [in 2009] calling for the abolishment of nuclear weapons,” Martin said. “Obama must announce actions he will take in the his remaining months as president that will actually bring the world closer to being free of nuclear weapons.”

The president, Martin said, “will look insincere if his words espouse ridding the world of nuclear weapons while at the same time his administration continues its plan to spend a trillion dollars over thirty years to upgrade nuclear weapons.”

Obama also will make his first visit to Vietnam, visiting Hanoi on May 24 and Ho Chi Minh City on May 25, the White House said.