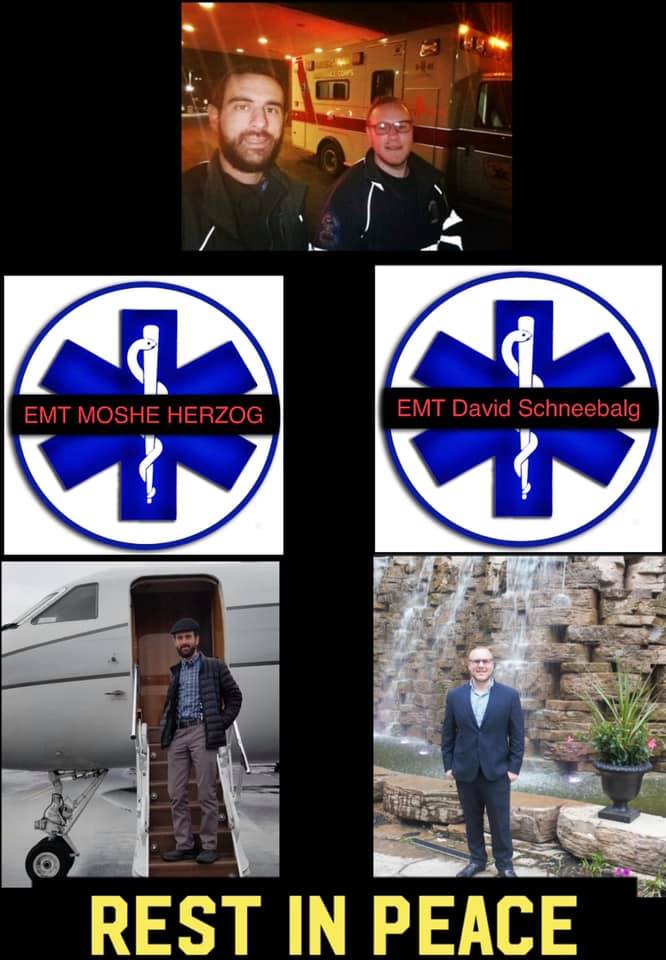 It is with great sadness that Matzav.com reports the tragic passing of R’ Moshe Herzog z”l and R’ Dovid Zvi Schneebalg z”l, who were killed in a crash early this morning.

The accident took place on the New York State Thruway in Rockland County, right outside of Monsey. CBS News reports that the accident happened at around 1:45 a.m. between exits 15 and 14B near Suffern.

R’ Moshe, 27, and R’ Dovid Tzvi, 26, both of whom were EMTs and members of Haverstraw Ambulance, were on their way home to Monsey after spending Rosh Hashanah out of town.

Details of the accident are still murky, but the Chevrolet Tahoe in which R’ Moshe and R’ Dovid Tzvi were traveling in on the southbound side of the highway was apparently struck by a tractor trailer, trapping the passengers in the vehicle. PIX11 reports that both the damaged SUV and overturned tractor trailer were completely off the road.

The Tahoe, near mile marker 29.1, in the center lane, attempted to change lanes and possibly exit the thruway at exit 14B at Airmont Road, state police said. The Tahoe collided with a 2007 Peterbilt tractor-trailer operated by Luis A. Velazquez, 59, of Elizabeth, New Jersey, which was traveling in the right lane, according to police. The collision caused both vehicles to exit the roadway over the right shoulder and come to rest in a ditch along the wood line, police said. The Tahoe became fully engulfed.

Velazquez, 59, was transported to Westchester Medical Center for unknown injuries.

R’ Moshe, a Chaveirim member, radioed his comrades, asking for help, stating that he was involved in a rollover.

The levayah of R’ Moshe Herzog will be held at 12:30 p.m. at the Monsey Bais Hachaim.