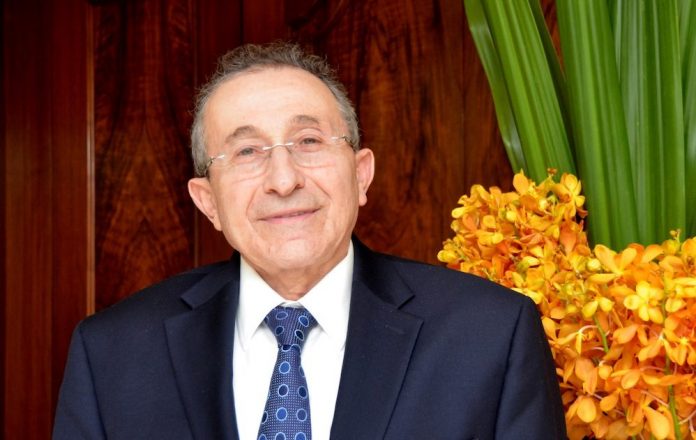 The rabbi who gave a benediction at the inauguration of President Donald Trump on Friday told The Algemeiner that his recitation of the kappitel of Tehillim remembering Yerushalayim and Tzion was “absolutely intentional.”

Rabbi Marvin Hier, the first-ever Orthodox rabbi to be asked to participate in the illustrious ceremony — and the only rabbi of any denomination to have done so since 1985 — said that though he “did not want to get political,” it was important for him to “make sure that people know Jews have been connected to Jerusalem since biblical times,” particularly following the recent UNESCO resolutions that denied Jewish ties to the Holy City, and UN Security Council Resolution 2334 last month, which determined Jewish settlement in any land beyond the 1949 armistice lines, including in east Jerusalem, was “illegal.”

It was for this reason, said Hier, that he quoted: “Bless all of our allies around the world who share our beliefs, ‘By the rivers of Babylon, we wept as we remember Tzion…If I forget you O Yerushalayim, may my right hand forget its skill’ (Tehillim 137).”

Rabb Hier also explained how his words fit his role at the event held to instate the new president. “I was a representative of the Jewish community,” he said. “So it was right to remind those viewing all over the world that the Jews have a historical connection to Jerusalem.”

Furthermore, he said, “The Torah was given to the Jewish people. Surely they didn’t want me to quote Shakespeare.”

During Rabbi Hier’s invocation, viewed live around the globe, the Twittersphere lit up with Nazi imagery. Likening Rabbi Hier to the devil, social media users expressed sorrow that Hitler had not finished the job of exterminating all Jews and similar messages.

This was “outrageous,” said Rabbi Hier, the founder and dean of the Los Angeles-based human rights organization the Simon Wiesenthal Center, which is in an ongoing battle to combat just such activity. “We don’t know who is behind it, but whoever it is, they are neo-Nazis, plain and simple. Everybody knows we have haters and bigots in our country. And the new Nazis who went on such vile rants would have behaved just as the old Nazis did in Germany.”

Rabbi Hier continued: “There are antisemites on the extreme Right and on the extreme Left — like the BDS-ers who call Israel an apartheid state. But nobody in his right mind can say that Trump loves these neo-Nazis. He’s got a daughter who converted to Judaism, a Jewish son-in-law whom he respects and Jewish grandchildren.”

In contrast, Rabbi Hier was “moved” by the five Christian clergy members who also took part in the event, saying they “were so accommodating and nice to me. They very much approved that the Jewish community was being  represented.” Not only that, he added, “Dozens of Christians who heard the benediction came up to me afterwards to say how much they loved it.”

Asked about Sunday evening’s announcement by White House press secretary Sean Spicer that the new administration was in the beginning stages of talks on relocating the US Embassy in Israel from Tel Aviv to Yerushalayim, Rabbi Hier said, “I hope Trump moves the embassy, despite those who advise against it. There’s a new Arab world out there, much of which secretly admires Israel and opposes radical groups like the Muslim Brotherhood.”

He added, “There is more than one way to move forward, such as placing the embassy in the part of West Jerusalem where there is already a branch of the consulate.”

Calling his decision to accept the invitation to participate in Trump’s inauguration — something many of his peers tried to persuade him not to do — Rabbi Hier said, “For me, it was a no-brainer. One day every four years, it’s OK for America, the greatest democracy in the history of the world, to affirm the peaceful transition of power to the duly elected president. It’s enough to have the other 364 days for political discord.”