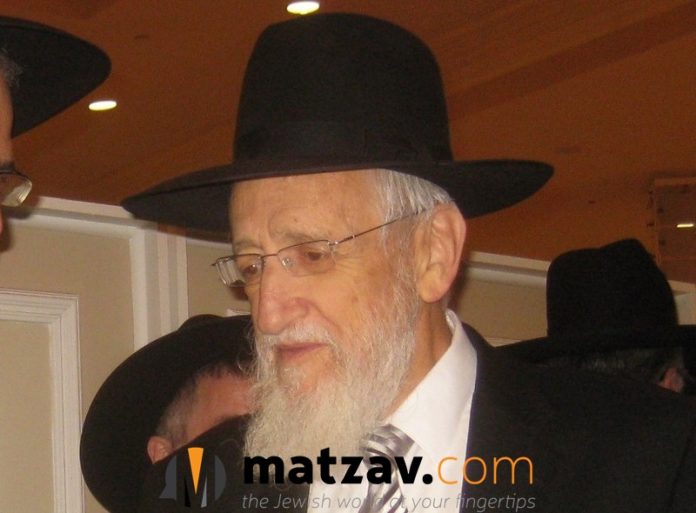 It is with great sadness that Matzav.com reports the passing of Rabbi Nisson Wolpin zt”l, noted pioneer in the world of Torah journalism who had a colossal impact on the frum world at large. He was in his eighties.

Rav Nisson was born in Seattle, Washington, to Reb Efraim Bentzion and Kaila Wolpin, who had immigrated from Russia. After studying each day at the local public school, he and his brothers learned for a few hours each day with Rav Boruch Shapiro, a talmid of the Ohr Somayach and the Rogochover Gaon who was serving as a rov in Seattle.

Rabbi Avrohom Birnbaum of Yated Ne’eman recalled once talking to Rabbi Wolpin, who told him that when he got married, there were less than 20 kollel yungeleit in the entire United States. Torah learning and learning in kollel after marriage were concepts that were ridiculed by many and certainly not understood, even by most G-d-fearing, observant Jews.

Rabbi Wolpin remembered how some of the pioneering yungeleit from Bais Medrash Elyon in Monsey subsisted on bread and peanut butter during the week and, lekavod Shabbos, they opened a can of sardines – in the goldeneh medinah of America.

After leaving kollel, Rabbi Wolpin entered the world of chinuch, serving as a mechanech at Yeshiva Ohr Yisroel in Queens, NY.

Rav Nisson’s most prominent role in the realm of askanus and influencing the hashkafah of the Torah world was as the editor of The Jewish Observer, published by Agudas Yisroel of America.

When Rabbi Moshe Sherer and Dr. Ernst L. Bodenheimer first approached Rabbi Wolpin to assume the editorship of the Jewish Observer in 1970, he was devoted to his position at Ohr Yisroel. Rabbi Wolpin was reluctant to give up a career in chinuch. He went to discuss the offer with his rebbi, Rav Yaakov Kamenetzky. Rav Yaakov listened carefully and then shared his feelings: “Until now you were a mechanech of children. From now on you will be a mechanech for adults.”

Thus began an illustrious career of serving as a conduit to disseminate daas Torah under the guidance of gedolei Torah. And it wasn’t always easy.

Rabbi Yosef Chaim Golding, managing editor of the Jewish Observer, recalled an internal debate within the Jewish Observer offices in November of 1999, when the Jewish Observer was preparing its special issue on the problems of children at risk. Because of the sensitivity of this topic, members of the Moetzes Gedolei Torah were sent pre-publication drafts of the articles. One of the roshei yeshiva called Rabbi Wolpin, and with a tear-choked voice implored him not to publish the issue, as it will cause untold grief to parents suffering from this malady. Another, after listening to that point of view, responded that the overarching need to bring this subject to the fore, in the hopes of helping those already suffering, as well as with the goal of preventing further such tragedies, pushed for its publication. The rest is history. The issue sold out within days of publication, necessitating a reprint equaling to triple the usual number of copies, followed by another special issue of readers’ responses to that issue.

The Jewish Observer delved into the topic of shidduchim years before the “shidduch crisis” became a household term. One of the several special issues on shidduchim included a cover blurb with a quote from Rav Matisyahu Salomon: “If one becomes sidetracked from what his focus should be, and concentrates on extraneous matters – such as beauty, wealth or honor – he is in effect losing sight of the purpose for which marriage was created.” This was just one example of the instructive purpose of the Jewish Observer.

For an inkling of the depth and consistency of Rabbi Wolpin’s work, one has but to look at the eleven volume ArtScroll Judaiscope Series, a compilation of hashkafah-filled books, collected from the pages of the Jewish Observer. Besides for the five biographical books on the Torah world, also published were Timeless Parenting, Of Home and Heart, The Ethical Imperative, A Path Through the Ashes, and Shidduchim, Shalom Bayis, and Beyond, each one an instructive and informative guide for various facets of Torah-true Judaism.

Rabbi Wolpin was a master writer, who knew the right words to use in various situations.

“A fierce storm wind chops the ocean into mountainous waves. The driving rain reduces the visibility of the ocean. The fragile ship is tossed from wave to wave like a dry leaf on a windy November day. Yet the passengers in the hold are secure, for they know that the ship is being guided by the experienced hand of the ever vigilant captain as he steers through uncharted waters. How fortunate they are to have a good captain in whom to put their trust. But suddenly the news from the deck reaches the passengers below. The captain is dead! Woe unto the ship that has lost its captain. Woe unto the generation that has lost its leader.

“You and I and Klal Yisroel are on that ship together. The waters are dangerous and choppy and the captain is indeed gone. It is difficult to visualize all of the Jews of the world in one boat. It is even harder to imagine them beset by the same stormy problem, since the problems that face one group are different than another. Yet, as a people, all Yidden are one and a storm in Algeria rocks the boat in Scranton. Only one man, Rav Aharon Kotler, guided the ship through all these multitudes of storms, and he is no longer with us.”

So eloquent, so precise, so penetrating, and so on the mark.

Rabbi Wolpin wrote an article that was featured on the cover of his inaugural issue as editor of The Jewish Observer, in October 1970. It was based on a maamar from Rav Dessler’s Michtav Me’Eliyahu on teshuvah. Rabbi Wolpin once reminisced, “Rabbi Moshe Sherer at the time expressed delight with the article’s inclusion, but felt that it should not have dominated the cover. It was regarding that point that Rabbi Sherer remarked, ‘Covers are meant to invite purchase. You sell magazines with timely, not the timeless.’ …In Rabbi Sherer’s book, the timeless wisdom of gedolei Torah was certainly vital.”

As it was for Rabbi Wolpin.

Rabbi Wolpin was a long-time member of The 16th Avenue Agudah in Boro Park, led by Rav Yisroel Perkowski, who, Rabbi Wolpin often said, was instrumental in giving his mispallelim a positive identity as “Bnei Torah.” He would constantly uplift them, in the sense that he felt that as Bnei Torah they should see themselves as being above the norms of behavior prevalent in frum society of that time.

Rabbi Wolpin spent many summers at Camp Munk in the Catskills, where he served as learning director.

Rabbi Golding shared that the memories that remain with him most are the many times that he walked into Rabbi Wolpin’s office, seeing him exhausted from marathon phone sessions with rabbonim, roshei yeshiva, or editorial board members. The articles he was working on had to be correct, as perfect as possible. Like a master mechanech, mistakes could be costly and efforts were always made to try to avoid the inevitable faux-pas. But no matter what, Rabbi Wolpin followed the directives of the gedolei Torah.

Rabbi Wolpin leaves behind a rich legacy, with lessons and ideals to be emulated and replicated by one and all.