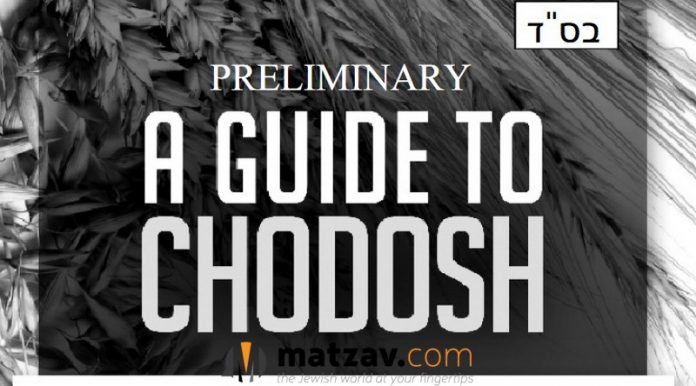 It is with great sadness that Matzav.com reports the sudden and unexpected passing of Rabbi Yoseph Herman zt”l.

Rabbi Herman was most well-known as the publisher of A Guide to Chodosh and for being the recognized trailblazer in the education and adherence of the halachos of chodosh.

[The Torah prohibits eating from the new grain harvest until the barley omer sacrifice was brought in the Bais Hamikdosh on the second day of Pesach. Grain that was planted close to, during, or after Pesach, thereby taking root after the time of the omer sacrifice, is not permitted to be eaten until the following Pesach. This grain is called chodosh, literally new grain. One observes chodosh by not eating food products containing chodosh grain. Grain that has taken root before Pesach, even if it is harvested after Pesach, is permitted to be eaten immediately, without restriction. This grain is called yoshon, literally old grain.]

For years, it was difficult to ascertain which products in the United States contained chodosh or yoshon. Rabbi Herman undertook to compile a list delineating what type of grains kosher food products were made from. He began to distribute the list, which, over the years, morphed into an extensive booklet, contained very detailed reporting on the chodosh status of hundreds of products produced by many companies.

Rabbi Herman was a legend for what he accomplished. The fact that so many kosher food products today are yoshon, and that so many products contain clear yoshon designations, is credit to Rabbi Herman and his decades of work in this regard.

Rabbi Herman was humble and modest about his achievements, never seeking recognition or exposure. He conducted his avodas hakodesh away from the limelight, while working selflessly to ensure the adherence of this important mitzvah.

In addition to his Guide to Chodosh, Rabbi Herman operated his Chodosh Hotline at 718.305.5133 providing all chodosh/yoshon updates.

Rabbi Herman extended himself in another way by hosting, in his home on Sylvan Road in Monsey, NY, a minyan named for Rav Yaakov Kamenetzky zt”l and comprised of many of Rav Yaakov’s talmidim.

His sudden passing has plunged his family, friends and admirers around the world into mourning.

The levayah will be held Friday morning and the aron will then be flown to Eretz Yisroel for kevurah there.