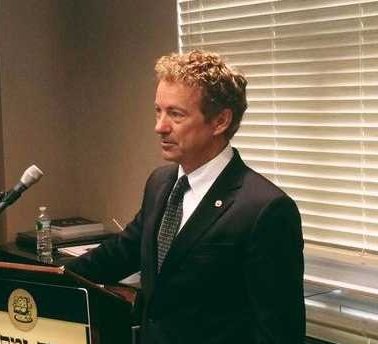 Sen. Rand Paul, R-Ky., returned to Washington, D.C., still in pain from an attack that left him with six broken ribs, but doing little to quell speculation about what caused his neighbor to lash out.

Paul, the second-term senator and former presidential candidate, arrived at the U.S. Capitol on Monday evening in time for two scheduled votes. Accompanied by two aides, the senator had no obvious scars or bruises but was clenched in pain as he walked. An aide attempted to deflect reporters as Paul quietly explained that he’s still struggling to breathe as his ribs heal. He even waved off and politely declined a friendly handshake from Sen. Marco Rubio, R-Fla. – one of his 2016 presidential campaign opponents – not out of spite, but because he said it might be too painful.

The senator and his wife flew from Kentucky on Monday in part, aides said, so he could vote against a procedural motion to begin debate on the nomination of Steven Bradbury, President Donald Trump’s pick to serve as the top lawyer at the Transportation Department. During George W. Bush’s administration, Bradbury was among the lawyers who helped write the so-called torture memos that endorsed brutal interrogation techniques. Paul is a longtime critic of Bush-era interrogation practices and other aspects of the years-long war on terror.

He is planning to be in Washington all week for Senate business, an aide said.

Paul declined to answer questions from reporters at the Capitol, but told The Washington Examiner in his first interview since the Nov. 3 attack that there was “no justification” for what happened.

“There is no motive that would justify hitting somebody from behind and breaking their ribs and damaging their lungs, so no, there is no justification for something like that,” Paul told the paper.

But the senator, citing the pending case against his attacker, declined to engage on what might have prompted the assault – still leaving unanswered many questions about what transpired at his Bowling Green, Kentucky, home.

The senator’s neighbor, Rene Boucher, 59, pleaded not guilty last Thursday as Kentucky state police and FBI investigations continue into the matter. For now, Boucher, a retired anesthesiologist, faces a possible 12-month sentence and a $500 fine if he is convicted of fourth-degree assault, according to a county prosecutor.

Police, and Paul himself, were unaware initially just how serious his injuries were – and Paul did not immediately seek medical attention, police said. His office initially described Paul’s injuries as “minor,” but later announced he had broken five ribs. A day later, they said he had six broken ribs.

No new evidence has emerged to help explain a motive for the altercation – but Boucher’s attorney has insisted that the incident “was unequivocally not about politics.”