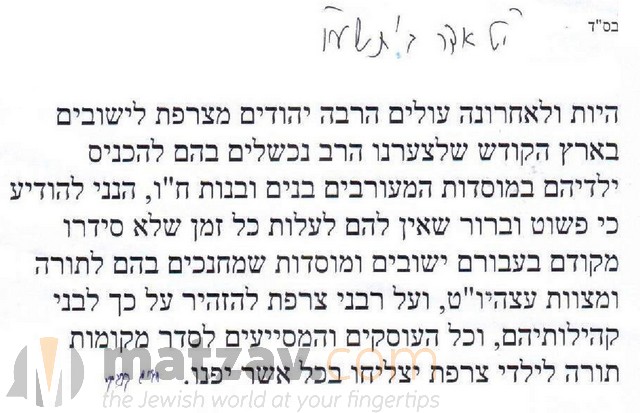 Rav Chaim Kanievsky has issued a ruling that French Jews should not immigrate to Israel before they have arranged proper religious education for their children.

The ruling comes in light of the fact that the Jewish Agency, which is working to bring French Jews to Israel, directs families to educational options that are not of a religious nature. Many families have been tempted to come to Israel without ensuring that their children will have a quality religious education as they had in France.

At a meeting with community representatives, Rav Chaim shared words of encouragement to askanim to work with all their might on this important issue, helping French Jews maintain their religiosity upon immigrating to Eretz Hakedoshah.

These days, events are held in various cities in France to direct French Jews considering a move to Israel. The events provide information about schools to register their children in and information about employment opportunities.

There has been a marked upsurge in the number of Jews from France immigrating to Israel as a result of terrorist attacks in Paris and elsewhere in Europe.

Among those involved in helping French Jews immigrate to Israel while also maintaining their religiosity is the Kaliver Rebbe of America, who sent a group of activists led by his son, Rav Yissochor Dov Taub, to help the Yidden of France in this regard.

The Rebbe instructed the group to explain to the French Jews about the need to live a life of Torah and for them to think carefully before rushing to leave France without a plan for their respective families.