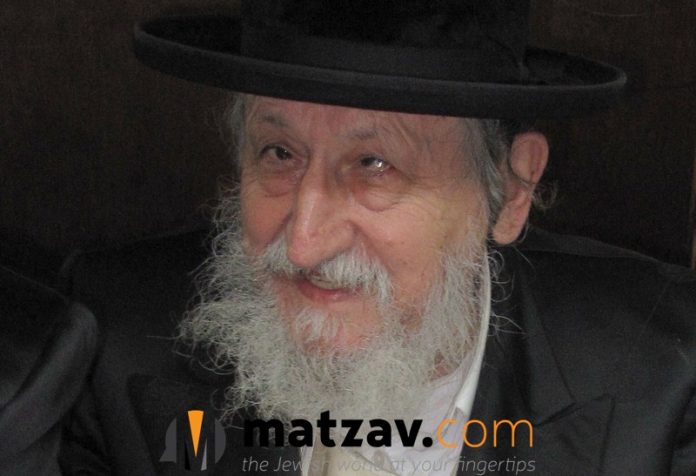 It is with great sadness that Matzav.com reports the passing of Reb Reuven Schmelczer z”l, prominent Skverer chossid and patriarch of a large, well-known mishpacha.

Reb Reuven’s father, a farmer in pre-war Hungary, was killed during World War II, leaving Reb Reuven an orphan at the age of 13.

Reuven and his brother Chaim spent time in the Bergen-Belsen concentration camp and, together with their mother, were among the 1,684 Jews who escaped Nazi-controlled Hungary on the Kastner train, which consisted of 35 cattle trucks that left Budapest on June 30, 1944, carrying them to safety in Switzerland.

Kastner, a Jewish-Hungarian lawyer and journalist, negotiated with Adolf Eichmann, the German SS officer, to allow a number of Jews to escape the Holocaust in exchange for gold, diamonds, and cash.

Reb Reuven was often asked how he was zocheh to get one of the coveted spots on the Kastner train together with the Satmar Rov, Rav Yoel Teitelbaum zt”l. He explained to his children that his mother, Sasha Elke, who had remarried, was a big “askan.” She was very involved in communal affairs. She was well-to-do and well-connected to influential people, and that was the zechus that saved him, he explained.

Upon arrival in the United States from Switzerland, Sasha Elke sought to place her two sons, Reuven and Chaim, in yeshiva. Reuven enrolled in Yeshiva Torah Vodaas, while Chaim joined the Tzeilimer Yeshiva. When Chaim was ready to switch yeshivos, Reuven wanted his brother to join the Nitra Yeshiva, but his mother didn’t want her son to be far from home.

Rav Chaim, indeed, attended Telshe in Cleveland and took on the Litvishe derech. He became a well-known talmid chochom and the founding menahel of Telshe Yeshiva in Chicago in 1960, while Reb Reuven remained in Kashau and then went to learn in Satmar.

Ultimately, the Serdehaly Rov, Rav Moshe Neuschloss, who became the dayan of Skver in 1957, brought Reuven, when he was in his twenties, to the previous Skverer Rebbe, Rav Yaakov Yosef Twerski zt”l,, forging a kesher between the Schmelczer family and Skver that continues to this day.

After World War II, the Rebbe, who married his wife, Rebbetzin Trana, a daughter of Rav Pinye of Ustilla and a granddaughter of Rav Yissocher Dov of Belz, in 1925, lived in Bucharest and then immigrated to the United States. He expressed his desire to create a rural Yiddishe community far from the hustle and bustle of city life. It is said that soon after he arrived on American shores, observing the spiritual desert in which he arrived, he said to his chassidim, “If I weren’t so embarrassed, I’d turn around and head back [to Europe] immediately.”

After spending a few years in Williamsburg, Brooklyn, where his home and bais medrash became a beacon for many who sought his counsel, the Rebbe founded a community and named it Shikun Skver, or New Square. Establishing the community – the first such shtetel in America -and its mosdos became his life’s work. In 1956, with a handful of followers, including Reb Reuven, the Rebbe moved to New Square. Reb Reuven was thus one of the pioneers of the fledgling community.

When Reb Reuven was still a bochur, he purchased a house in the newly formed Skverer shtetel, and the rebbe proposed to establish a cheder in that house.

The melamed of the cheder, Reb Chaim Fried, operated a grocery in the basement of the Schmelczer home. That was until the rebbe said, “I built New Square so that grocery people can become melamdim, not so that melamdim will become grocers.” Reb Chaim Fried then relinquished the grocery.

Reb Reuven, having been unsuccessful in finding a shidduch on these shores, traveled to Eretz Yisroel for that purpose.

The story goes that Reb Reuven’s father-in-law, Rabbi Naftoli Tzvi Weisberg, encountered vin a store, where he observed the bochur taking maaser on fruits. He asked him who he was and why he was in Eretz Yisroel, and Reb Reuven explained that he had come to find a shidduch. “I have a shidduch for you,” said Reb Naftoli Tzvi. “Come with me.” He took Reb Reuven to his home in Beer Sheva, where he introduced Reb Reuven to his daughter and the shidduch was made. Reb Reuven was 28 years old. His kallah was 16.

As a kallah, Reb Reuven’s wife took a job in London to earn money to pay for her wedding, while her chosson was in the United States. It was difficult for her, as her parents were in Eretz Yisroel and her chosson was in America, while she was alone in England. She often spoke about that period and how trying it was for her.

The couple got married in Shikun Skver. Reb Reuven basked in the glow of the Skverer Rebbe, taking his sons to the rebbe’s tishen. The rebbe’s glowing visage and the surrounding atmosphere inspired the Schmelczer youngsters.