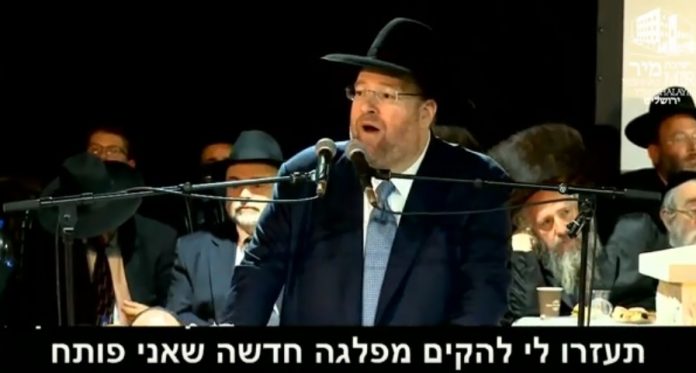 “Go to the Army Rather Than Be Involved in Machlokes”

“Why Are We Letting The Vocal Minority Seemingly Represent Us?”

“One of the Biggest Divides Klal Yisroel Has Faced”

The renowned Los Angeles baal tzedakah and philanthropist began his remarks by stating that he had a speech ready and decided yesterday to “change what [he was] going to talk about.”

“There’s no secret that, letzaareinu harav, there’s strife and discord in today’s olam hayeshivos,” he said. “I can’t tell you the reasons behind the dispute. I can’t tell you with certainty whose siding with who… I definitely don’t know who’s right and who’s wrong, nor am I sure even if there is a right and a wrong. What I can tell you is that the publicity and the outright chillul Hashem that this causes on a daily basis is beyond belief, without precedent, and is causing a hashchasah and a carnage which can only lead to the obliteration of Klal Yisroel as we know it today. Although I am not considered to be a maven in Jewish history, I cannot say for certain that this is not one of the biggest divides and unrest that Klal Yisroel has faced throughout her rich history.”

Later, he said, “You’d be right if you ask why the opinion of a pruste baal habayis from a different country should carry any weight, or should he even have the audacity to inject himself into something that is out of his league and way out of his pay scale. And in fact, you’d be right for asking, or, better yet, you’d be mostly right. But I and other tomchei Torah have a right to know the final destination of our contributions.

“Morai verabosia, I am here to let you know that I never signed up for this, so let me be perfectly clear:

“I know there are chilukei de’os between several gedolim, and in fact through our history there have been many disagreements, where you may have accepted one side or one party’s argument and we all agreed that it was ailu v’ailu divrei Elokim chaim.

“Unfortunately, in this seven-year unprecedented battle, we’ve all taken it to new heights and new places, places that are very dangerous to lurk in. There’s clearly no problem if anyone or everyone follows the advice of their rov or their rosh yeshiva. Klal Yisroel always had different mesoros. But to go one inch beyond, one inch beyond that, and to bring it up to a level or discuss it in a way that will lead to provocation, to sinah and to machkokes, is where you’ve overstepped your boundaries in a dangerous way.

“And therein lies my personal negius.

“I try, and have tried for the past 20 years, to support Torah and chesed, to attempt in my own little way to assure the continuity of ki heim chayeinu v’orech yomeinu. Anything I was able to be menadeiv came solely from siyata diShmaya. But I can also assure you that I’ve invested my share of hishtadlus. And therefore, I want to be clear, even though I presume that this message is not nogeia to anyone here or their talmidim, and beshitah I’ll never hold yeshivos or their talmidim accountable for the bad behavior of a very vocal minority.

“But I’d like to officially state that anyone who includes themselves in the ugliness of trying to convert this from a mere chillukei de’os to outright destructive machlokes in a public manner cannot be neheneh from any money that I contribute.”

As for those who might accept money from Shlomo Yehuda under false pretenses, Shlomo Yehuda said that this year, for the first time, he “specifically and intentionally decided not to ever be mochel one of these people who benefit from the little tzedakah I gave, and he’s a pure ganov or gazlan depending on the circumstances.”

Shlomo Yehuda addressed a rumor that was spread several weeks ago via WhatsApp about him and a certain rosh yeshiva, calling it “sheker vechozov (absolute falsity).”

Shlomo Yehuda spoke about “innocent children who are now 11 or 12 years old” who “know of nothing but machlokes,” and, having grown up with machlokes, view machlokes as “the expected way of living. They’ve been inundated with enough terms to be mevazeh every gadol in Klal Yisroel. They have no chashivus for Yahadus. Their sole interest is political parties. And they’ve lost all the temimus of tinokos shel bais rabbon. Oy meh hayah lanu. Our children are baalei mum.”

Shlomo Yehuda continued: “There’s a crazy phenomenon in the world today, which, despite how nonsensical it sounds, seems to be gaining ground. These are the crazy people who are called ‘Holocaust deniers.’ How different are we when you should ask any child in Yerushalayim, Kiryat Sefer, etc., etc. to describe the Holocaust to you and describe the deadly hatred and almost robotic atrocities of a Nazi yemach shemom vezichrom. What kind of horrible klop it is to those 6 million kedoshim who were killed al kiddush Hashem. What type of sheer abuse would be caused when that child answered a Holocaust survivor that a Nazi is a frum bochur or yungerman who decides, for one reason or another, to join the army, and the whole Holocaust is just a collection of these so-called Nazis.

“Maybe I’m wrong and this is all okay as long as you attend first seder with shmiras hasedorim…,” said Rechnitz wryly.

“Why are we letting the vocal minority seemingly represent us and causing such an unprecedent?”

Subsequently, Shlomo Yehuda remarked, “From the little I understand, this whole machlokes has to do with going to the army. On my plaitzos, if you have a choice to be involved in the machlokes, the rabim, lesheim machlokes, or to go to the army – and I’m obviously not referring to giyus banos – then you should go to the army. As a matter of fact, you’re already in the army. You’re starting fires, you’re throwing stones, you’re throwing people out of their homes and botei midrashim. You’re trying to kill the other side. The only difference between you and the IDF is that their uniforms are green and yours are black.”

Shlomo Yehuda ended on an upbeat note, calling for achdus and stressing that it is only with unity that Klal Yisroel can ultimately succeed and prevail.

{By Matzav.com Israel News Bureau, with transcription by CB Frommer and A. Shiff)