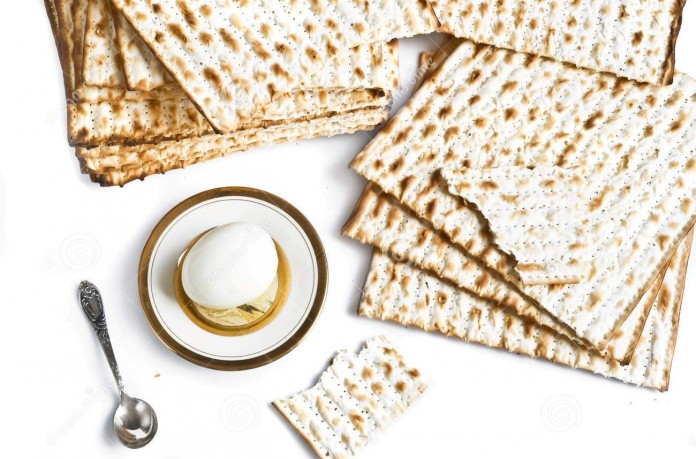 This year we have the opportunity to perform an Eruv Tavshilin on erev Shavuos.

If the Torah permits the preparation of food on Yom Tov for Shabbos, why did the Rabbis institute the Eruv Tavshilin in the first place?  The Gemara (Beitzah 15b) gives two explanations:

Matzah is used on Pesach as the baked item of the Eruv. It is customary to use this matzah for an additional mitzvah as one of the two ‘loaves’ of lechem mishnah at each of the three Shabbos meals, and to consume the matzah at the third meal of Shalosh Seudos.

Nonetheless, the Maharsham (Ha’aros OC 527) rules that this is permitted.  He bases his position on a ruling of the Magen Avrohom (OC 559:13). The Magen Avrohom discusses a person who made matzos on the Yom Tov of Pesach, and there are remnants of dough in the crevices of the utensil which will become chometz unless the dough will be baked before 18 minutes elapse.  The Magen Avrohom allows the utensil to be placed in an oven so that the remaining dough will bake, even though it is customary to not eat that dough because it may not bake properly. Why is this permissible? If the dough cannot be eaten, it is not being made for Yom Tov, in which case baking should be forbidden.  The Magen Avrohom explains that according to the letter of the law, it is permissible to eat these pieces of dough, as the common practice to not eat dough lodged in crevices is only a chumrah (stringency). Therefore, the dough may be baked on Yom Tov.  The Maharsham writes that the same rationale applies to our situation.  According to the letter of the law, non-Shmurah Matzah may be eaten on Pesach, and those who refrain from eating non-Shmurah Matzah, do so only as a chumrah.  Therefore, the food is treated as edible, and it may be baked on Yom Tov to be served on Shabbos.

Does the same logic apply to cooking gebrochts (Matzah that came in contact with liquid) on Friday erev-Shabbos for those who have the minhag to not eat gebrochts for the first seven days of Pesach?  This is a matter of dispute.  Sefer Dovev Meisharim (Volume 1, Chapter 49) is lenient and equates gebrochts to non-Shmurah Matzah, as both restrictions are at most a chumrah.  However, Nishmas Chaim (Ch.52) writes that this is not permitted because not eating gebrochts is more than a chumrah and is rooted in authentic halachic considerations. Minchas Yitzchok (Volume 7, Chapter 33) writes that there is a basis to be lenient but suggests that it is better to have one who does not have this minhag of not eating gebrochts prepare the food for the others.

(There are a few other alternatives if the Eruv Tavshilin is overlooked; however, due to their complexity, they fall beyond the scope of this article. To learn about these options, it is recommended to speak with a local orthodox rabbi.)

Wishing everyone a Chag Kasher V’Sameach.