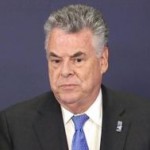 President Barack Obama needs to acknowledge the fight against the Islamic State (ISIS) is going poorly if he hopes to get support from the public and allies, says Rep. Pete King.

“What the president has to do is stop claiming that we have ISIS contained,” King said Sunday on “The Cats Roundtable” on AM 970 in New York. “I think the American people have lost faith, because they see when things are going poorly, the president isn’t acknowledging it.”

The recapturing of the city of Ramadi from ISIS recently was significant, King told host John Catsimatidis, but added that Iraq forces actually had previously controlled the city before ISIS had captured it from them. The bigger gain will be retaking Mosul, he said.

Obama hasn’t been showing the will or ability to fight terrorism, King said, and is causing America’s allies in the Middle East to lose faith.