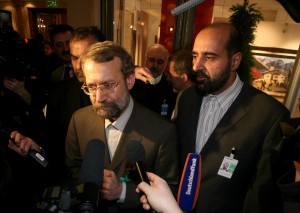 Speaking to NPR during a trip to New York, Larijani warned that if the U.S. imposed new sanctions on Iran, the country would reconsider its commitments to the nuclear deal.

“If something … happens in the U.S. Congress, or if there are new types of sanctions on us, then they should not expect us to go — to implement. Or if the Americans don’t stay true to their obligations on their part, they shouldn’t expect us to do it,” said Larijani, a conservative politician who has been speaker of the Majlis or parliament since 2008.

Larijani claimed that his country views its concessions — such as sealing off the heavy water reactor at the Arak complex — as permanent, and worried that the U.S. did not see its own commitment to remove sanctions in the same light.

The Obama administration contends that the deal gives the U.S. the authority to slap back international sanctions on Iran if it cheats. The president said the U.S. will also be in a better position to launch military strikes, as a last resort, against Iran in the event it dashes for nuclear weapons.

Critics, including GOP lawmakers and some Democrats, have criticized the Obama administration for agreeing to remove sanctions on Iran’s nuclear and military programs before the country has proven its commitment to non-proliferation and reined in its regional sponsorship of terrorism. They argue that the deal did not go far enough in dismantling Iran’s nuclear program, allowing thousands of centrifuges to remain and controversial nuclear sites such as Fordow to stay open.

The White House has said international sanctions will crumble whether the U.S. peels them back or not. Samuel Verger, a former national security adviser in the Clinton administration, said on Tuesday the unraveling of sanctions would begin with “outer ring” countries like China, Japan and India, whose support for the embargoes against Iran were instrumental in spurring Iran to negotiate. Switzerland already lifted sanctions against Iran before the deal’s adoption and implementation.

Ultimately, Larijani said Iran believes the nuclear deal is a test for the U.S., which led the P5+1 group that negotiated the deal with Tehran, especially considering the “very dark” history of relations between the two countries. The Algemeiner