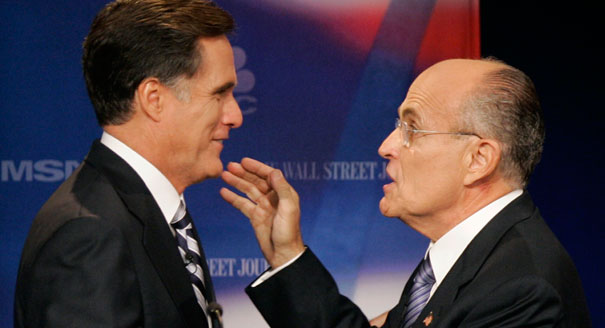 It was the first time that Trump’s transition team has publicly confirmed that Romney and Giuliani are competing for the highest ranking Cabinet position. Opponents of Romney have waged a remarkably public fight against him, saying the former Massachusetts governor should not get the nod because he attacked Trump in harsh personal terms during the presidential campaign and that Giuliani should be rewarded for his loyalty during the campaign.

Transition team officials would not name the other two finalists, but other leading candidates include retired Army Gen. David Petraeus – a former commanding general of the U.S. Central Command and CIA director – and Sen. Bob Corker, R-Tenn., chairman of the Senate Foreign Relations Committee.

A fifth possible candidate is retired Marine Gen. John F. Kelly, former chief of U.S. Southern Command. Kelly, who clashed with the Obama administration over women serving in combat and plans to close the prison at Guantanamo Bay, is also a candidate for homeland security secretary and possibly other positions, people familiar with the selection process have said. Kelly is scheduled to meet with the president-elect today at Trump Tower.

Trump aides said there is no set timetable for making a final selection on the State Department and that the president-elect’s decision will likely not be announced this week. Trump met with Romney Tuesday night for a two-hour dinner at which the two men were seen laughing and munching on frog legs and other delicacies.

Afterward, Romney emerged and told reporters: “I had a wonderful evening with President-elect Trump,” That stood in stark contrast to the campaign, during which Romney had been one of Trump’s leading detractors, labeling him a “con man,” a “fake” and a “phony” who was unprepared for the presidency.

Jason Miller, a senior Trump communications adviser, said Wednesday that Trump also “thought the dinner went very well” and that the two men had “good chemistry.” He added that Trump and Romney “have not spent a significant amount of time together, so this is still the process of getting to know each other.”

The naming of finalists for the State Department post came as Trump appeared to be focusing on core economic issues in his emerging Cabinet, while he prepared to put aside his sprawling businesses.

President-elect Donald Trump appeared to be focusing on core economic issues in his emerging Cabinet on Wednesday, while he prepared to step aside from his sprawling businesses.

“This team will be instrumental in implementing the President-elect’s America First economic plan that will create more than 25 million jobs over the next decade,” Trump’s transition team said in statement.

The economic focus came as Trump’s advisers continued promoting his role in a deal with air-conditioning manufacturer Carrier, which has announced it would reverse plans to move one of its factories from Indiana to Mexico. The company, owned by United Technologies, said about 1,000 U.S. jobs would be preserved. Trump’s promise to keep jobs in the United States and rebuild American manufacturing was a core part of his insurgent campaign.

“The Carrier deal, I think it’s terrific,” Mnuchin told reporters as he walked into Manhattan’s Trump Tower Wednesday morning to meet with his future boss. He said Trump and Vice President-elect Mike Pence had “picked up the phone and called the CEO of the United Technologies and told them we want to keep jobs here. Can’t remember the last time a president did that.”

Details of the deal remained unclear, including the extent of Trump’s personal involvement versus Pence or other officials, and whether any incentives were offered to keep the jobs in the state, where Pence is the governor.

Also uncertain were the specifics of how Trump, a longtime real estate developer with interests around the globe, planned to step away from overseeing his business. Trump tweeted Wednesday morning that he would soon leave the conglomerate.

“I will be holding a major news conference in New York City with my children on December 15 to discuss the fact that I will be leaving my great business in total in order to fully focus on running the country in order to MAKE AMERICA GREAT AGAIN!” Trump wrote on Twitter, which has remained his favorite communication medium during the transition.

The announcement, seen as a response to increasingly voiced concerns about the potential conflicts of interest between Trump’s public and private roles, marks a turn from his months-long refusal to distance himself from his private affairs while holding the nation’s highest public office.

But Trump did not say if the new arrangement would include a full sale of his stake or, as he has offered before, a ceding of company management to his children, which ethics advisers have said would not resolve worries that the business could still influence his decisions in the Oval Office.

Presidents are not bound by the strict conflict-of-interest laws governing most U.S. elected officials. But most modern presidents have agreed to sell or sequester their assets in a “blind trust,” led by an independent manager with supreme control, in order to keep past business deals, investments and relationships from influencing their White House term.

Giving company management to his three eldest children – Donald Jr., Eric and Ivanka – would still leave open the potential for Trump to make presidential decisions for their benefit. The children have already played a key part in Trump’s governing preparations, serving on the transition team now selecting key appointees and sitting in on meetings with foreign heads of state.

With Mnuchin, Ross and Ricketts, Trump’s Cabinet nominations reward their loyalty and roles in his campaign. Both Mnuchin and Ross were financial contributors and advisers, while Ricketts’s father financed a pro-Trump super PAC.

Mnuchin, an investor and former Goldman Sachs executive who joined Trump’s campaign in May as finance chairman, has no government experience. But in his statement announcing Mnuchin’s nomination, which is subject to Senate confirmation, Trump hailed the former private equity fund head as “a world-class financier, banker and businessman,” who has “played a key role in developing our plan to build a dynamic, booming economy that will create millions of jobs.”

Ross is an investor known as the “king of bankruptcy” for buying beaten-down companies with the potential to deliver profits. He helped shape the Trump campaign’s economic agenda, particularly its hard-line stance on the need to renegotiate or withdraw from free trade agreements. That position resonated with the working class voters who were instrumental in delivering Trump’s upset victory.

Trump said that Ross, whose nomination is also subject to Senate confirmation, “is a champion of American manufacturing and knows how to help companies succeed. Most importantly, he is one of the greatest negotiators I have ever met.”

The two expressed confidence in the incoming administration’s ability to boost economic growth as high as 4 percent a year.

Crucial to that projection would be passage of Trump’s proposed overhaul of the tax code, including streamlining individual tax rates into three brackets and reducing the corporate tax rate to 15 percent. Independent research groups have estimated the plan could cost as much as $6 trillion over the next decade. However, that analysis does not include the potential economic benefits the tax cuts could generate.

Trump’s new team spread out to give a sales pitch on Wednesday for his economic vision. In a joint interview with Ross on CNBC’s Squawk Box, Mnuchin said reforming the nation’s tax code would be Trump’s top priority and promised significant tax breaks for the middle class but no absolute cut for high-income households.

And at Trump Tower, Mnuchin told reporters that the new administration’s “number one priority is going to be the economy, get back to three to four percent growth. We believe that’s very sustainable.”

He added, without elaboration, that Trump will ensure that “we repatriate trillions of dollars back to the United States.”