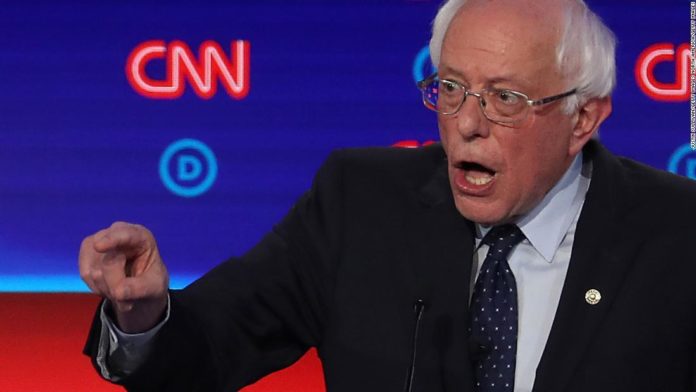 The Sanders proposal, like his plan to replace private health insurance with a federal system, envisions a significant expansion of the government’s role in the economy. He would offer billions in subsidies to replace gas-guzzling vehicles with electric ones by 2030, a new public system of clean electricity generation that could sideline private utilities, and an infrastructure program that would remake much of the economy and employ an estimated 20 million more Americans.

The sheer scale of the effort – which the senator compares to Franklin Delano Roosevelt’s 1940s mobilization to fight World War II – was central to his message in rolling out the plan. Averaging more than $1.6 trillion a year for 10 years, the new program would dwarf the entire annual U.S. discretionary budget, which was about $1.3 trillion in 2018, and would amount to more than double the current military budget.

“People are telling me, ‘Bernie, the plan you just released to combat climate change is expensive.’ And you know what? They’re right – it is expensive. But the cost of doing nothing is far more expensive,” he said at a community center here before a crowd of about 700. “The scientists have told us that the cost of inaction on climate change will put the entire planet, and life as we know it on Earth, in serious jeopardy.”

The proposal fits Sanders’ pattern of staking out positions that mark the liberal edge of the Democratic field. The strategy risks alienating centrists in the primary and general elections, but it could also boost Sanders’ self-depiction as the true revolutionary in the field.

Sanders advisers say the initial spending would not recur after the first decade, and would be funded by a broad array of sources, including new revenue from electricity customers, new corporate taxes, cuts in military spending, and awards from litigation against fossil fuel companies.

“It’s much more European-style democratic socialism than what anyone else is offering,” said Carl Pope, a former executive director of the Sierra Club who now works on climate policy for former New York Mayor Michael Bloomberg. “This is the most expansive attempt to take on the conceptual framework for the Green New Deal.”

The Green New Deal is a climate change plan promoted by Rep. Alexandria Ocasio-Cortez, D-N.Y., and other lawmakers, but it emphasizes broad goals rather than presenting a detailed policy menu.

Sanders’ plan comes as Democrats are significantly shifting their approach to environmental issues. As recently as 2012, Barack Obama ran for reelection on an “all of the above” energy strategy that included a role for coal-burning power plants. Now most candidates running for president say their goal is to move beyond fossil fuels altogether.

The preferred methods for achieving this transformation have also begun to shift. In 2016, Sanders demanded that the Democratic platform include a tax on carbon. This time Sanders makes no mention of the idea, which some activists dismiss as insufficient given recent scientific warnings about the pace of global temperature rise.

“I think we’ve come farther than that now,” Sanders said, when asked about a carbon tax after his event Thursday. “It’s not an essential part of what I believe has to happen.”

The new dynamic is driven by a confluence of factors pushing climate concerns into the top tier of concerns among Democratic voters.

New recommendations from the Intergovernmental Panel on Climate Change call for “rapid, far-reaching” changes to curb emissions. Severe floods and wildfires over the last year have raised concerns about immediate effects of changing temperatures. And President Trump, who has called climate change a “hoax” and said he does not believe his own government’s warnings about its likely economic impact, has also provoked backlash among liberal voters.

A broad array of Democratic presidential candidates – including former Rep. Beto O’Rourke of Texas, former vice president Joe Biden, and Sens. Michael Bennet of Colorado and Amy Klobuchar of Minnesota – have embraced the goal of net-zero carbon emissions by 2050, which Sanders uses to frame his plan. Sen. Elizabeth Warren of Massachusetts has proposed a large federally backed green-energy manufacturing program.

But the price tags for taxpayers are far lower under the other candidates’ plans, which depend more on private sector investment.

Sanders advisers say direct government investment would be a surer way of meeting the 2050 goals than trying to predict private sector investments, and that they hope his climate plan will reshape the party’s discussion of global warming.

“Like Bernie’s other proposals that people once said were too radical and are now central to the Democratic platform, Bernie will always propose the true solution to what we face, despite the wrath of Wall Street or the political squashiness of others,” said Josh Orton, national policy director for the Sanders campaign.

Still, there is no clear route for many of these plans to make it through the current Congress, especially the Republican-controlled Senate. Divisions within the Democratic Party could also imperil dramatic climate action even if the party regains control of both branches of government.

“I see these proposals as both markers and mobilizing tools,” said Jody Freeman, a former climate adviser to President Obama who now teaches at Harvard Law School. “They are a marker that says, ‘We care about climate change. We really, really do.’ And they are a mobilizing tool because we are in a primary and the idea is to try to attract the left side of the spectrum.”

Climate activists who have been pushing for broad environmental policy changes cheered the sweep of the Sanders proposal.

“I think Bernie Sanders plan that he released today really raises the bar,” said Evan Weber, political director of the Sunrise Movement, a youth protest effort that has helped elevate the issue of climate change. “It is the biggest, boldest and most ambitious plan we have seen in the fields so far.”

Republicans have long argued that Democratic plans to fight climate change would hurt the economy, raising energy prices and pushing workers out of jobs. In response, Democrats, including Sanders, have recast their proposals as stimulus measures.

Unlike some other candidates, Sanders would seek to phase out nuclear electricity generation, which produces about 20 percent of the U.S. supply, by barring new construction and declining license renewals. He also rules out using carbon capture technology, which many environmentalists see as a necessary to deal with certain heavy manufacturing emissions.

“If Americans are scared that this is going to negatively impact their economy, they will not be supportive of the most ambitious climate plan and they won’t be supportive of the Democratic nominee,” said Christy Goldfuss, a scholar at the Center for American Progress who worked on climate policy in the Obama White House.

For the moment, the Democratic field is more focused on competing for liberal primary voters. In a June poll of likely Iowa caucusgoersconducted by CNN, the Des Moines Register and MediaCom, three out of four said “recognition of climate change as the greatest threat to humanity” was a necessary qualification for a candidate.

Before announcing his plan in Chico, Sanders toured the charred forests of the Sierra foothills in California to bring attention to the danger of forest fires. A 2018 fire there killed 86 people and destroyed thousands of homes and cars. The fire was sparked by utility electrical lines, but it spread rapidly because of dry conditions.

Sanders’ audience included voters like Chico resident Thomas McNairn, 23, a climate change activist who said he is closely comparing the candidates’ plans to figure out his choice for 2020.

“We have 12 years until everything is irreversible,” McNairn said, before hearing Sanders speak at the rally. “We don’t have enough time to address it in the future.”