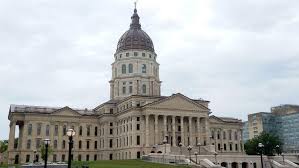 Some Kansas lawmakers are backing a bill that labels same-gender marriages “parody marriages” and seeks to stop the state from recognizing them.

The bill comes just months after voters elected the state’s first openly toeivah lawmakers, and less than two weeks after the introduction of a bill that would prohibit discrimination against toeivah individuals.

The bill is very unlikely to get past the state’s Democratic Governor Laura Kelly, whose first act in office was to restore non-discrimination protections for toeivah state workers. However, the bills mark the reemergence of debate over same-gender marriage at a time when Democrats and some Republicans are pushing for non-discrimination legislation.

The Kansas Constitution still prohibits same-gender marriage, but the Supreme Court has ruled that same-gender couples have the right to marry. “Their marriage probably doesn’t affect me… but in my opinion, they’re trying to force their beliefs on society,” said Rep. Randy Garber, a Republican and the bill’s lead sponsor. Read more at the Kansas City Star.